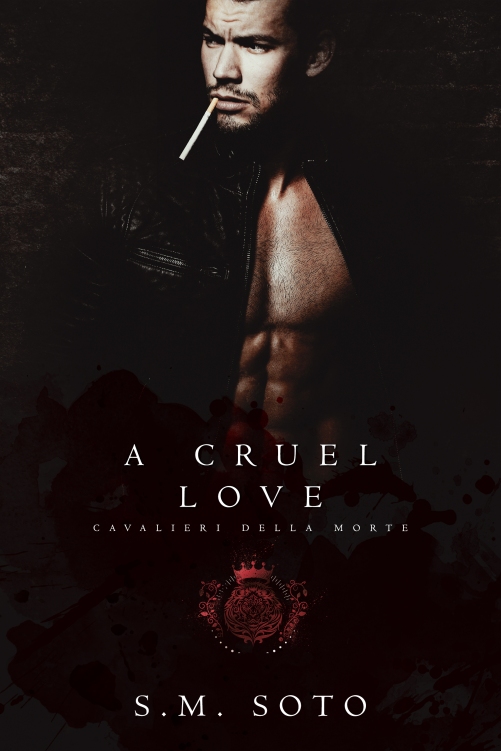 As a hitman for hire, Percivale is no stranger to violence.

From the moment he saw Blossom Jaymes through the window of her bakery, he knew he was in too deep. Not only was she as sweet as her perfectly crafted treats, but she was a soft-spoken, golden-haired angel that shone like a bright beacon in his dark world. And Percivale didn’t deal in angels. He dealt in death and crime. The even bigger issue? Percivale’s next hit is on said sweet little baker who doesn’t seem to realize how much danger lurks around her with each passing day.

If he doesn’t get the job done, who will?

When Percivale has to decide what’s more important to him—the life of a woman who may very well be innocent or getting his revenge on the men who murdered his family—the lines become blurred. Morals are twisted and a deathly chase ensues that can only result in one thing—Blossom buried six feet under.

Can Percivale let his lust for revenge go in order to save Blossom from the bounty on her head, or will the power she unknowingly holds over him be what gets her killed?

Add ‘A Cruel Love’ to your TBR ➜ http://bit.ly/ACruelLoveTBR 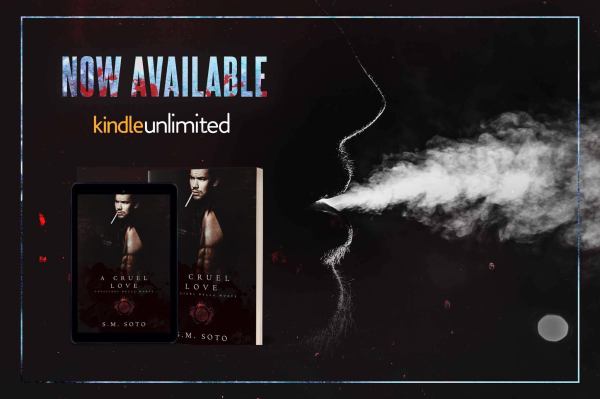 So, if you follow me then you know I’ve been pretty hooked on the Cavalieri Della Morte Series, told in dual POV A Cruel Love is book # 6 but can be read as a standalone. I’ve enjoyed all of the books so far (I have a couple of favorites though!) but A Cruel Love was totally different than the other books in the series so far!

Most of the other guys, once they realized their feelings for the women in their lives they were still total badass assassin BUT they developed a bit of a softer side… not Percivale! He’s an asshole through and through but yet in true S.M Soto fashion, you completely fall for him anyway.

A Cruel Love is Percivale and Blossom’s story.

Blossom Jaymes is the owner of Blossom’s Confectionary Sweets and a very nosy girl… apparently a little too nosy for the Cavalieri’s liking. After Blossom’s neighbor/friend Janet goes missing Blossom begins to ask a little too many questions and since the Cavalieri are responsible for the girl going missing, Arthur needs Blossom to stop poking around and asking questions. So he sends one of his men out to “handle” her. 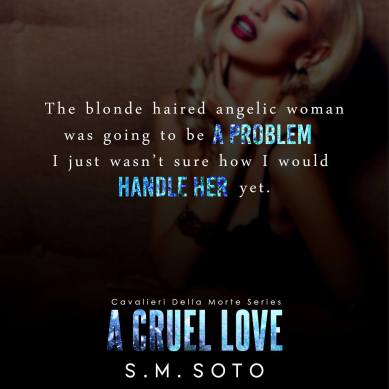 Percivale is a man fueled by his lust for vengeance. After growing up in the Italian mob and watching his father and brother brutally slain in front of his mother and him as a small child, he’s declared revenge on all of the men responsible but working for Author and the Cavalieri fuel his craving for bloodlust.

But now that he’s been watching Little Miss Blossom with the Heterochromia eyes, for some reason, he can’t kill her. The more he watches, the more intrigued by her he is. Blossom just seems too good to be true.

“Defiling this sweet angel was all I could think to do to make it easier. To make killing her easier. But it wasn’t. I could tell myself that over and over, and it still wouldn’t change how I felt about Blossom Jaymes. She was a bright beacon of light, and I was the darkness, consuming all of her, draining her of everything pure she had to offer.” 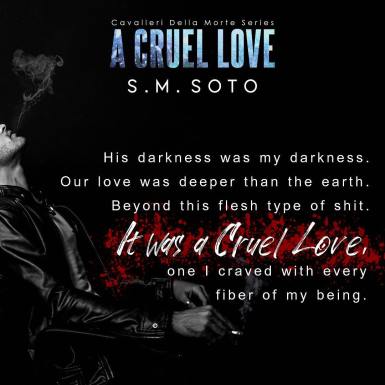 These two characters couldn’t be more different, Perc is a rough and rugged take no shit type of man, while Blossom is soft-spoken and meek but yet for some reason, right or wrong, they are drawn to one another, and together they both bring out something the other is lacking.

“They say opposites attract, and they’d be right: this man was my opposite in every way. I could tell just by looking at him, just by hearing his voice. He had a certain confidence that I’d lacked my whole life. A self-respect and backbone I could only dream of having.”

No matter how hard he tries to convince himself Percivale just can’t make himself kill her. But he also can’t not follow Arthur’s orders, if he does then they’ll BOTH be killed.

Can Perc get out of killing Blossom without getting them both killed? Or will he FINALLY pull the trigger on Blossom…?

You’ll have to check out A Cruel Love and find out for yourself! 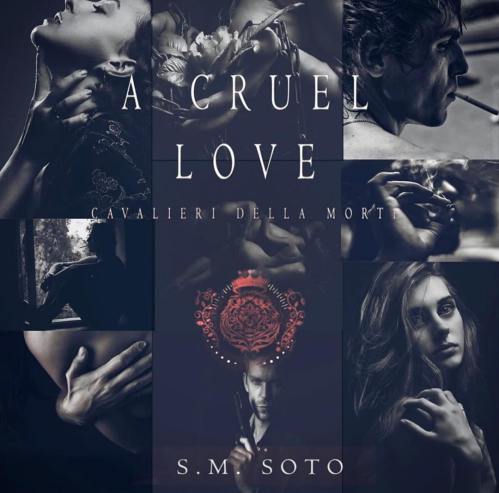 A Cruel Love was much more of a dark read than the other books in the series so far and I absolutely loved it! In the beginning, you will more than likely HATE Perc, I know I did but the more you get to know about him and the more he puts on the line for Blossom, you’ll grow to love him.

Blossom was such a sweet heroine, in the beginning, I wasn’t really sure if I was going to like her, but being with Perc and watching her grow because of it… yea she turned into a pretty awesome heroine.

“When I’m around him, there’s another side of me I’ve never known was there. I’m not just sweet little Blossom Jaymes. I’m Blossom Jaymes, the one with a backbone. With an insatiable desire to feel this dangerous man’s hands on my skin. With a penchant for darkness. I’m different.”

I absolutely love all things S.M Soto so I’m not surprised in the least that she blew this book out of the park! It’s dark, gritty, and HOT all at the same time. It’s mind blowing how she can take characters and make you feel one way about them and then over the course of the book change your entire opinion.

An absolutely wonderful addition to the Cavalieri Della Morte Series and again you can totally read it as a standalone and not feel that you are a missing anything.

Highly recommend checking this one out! 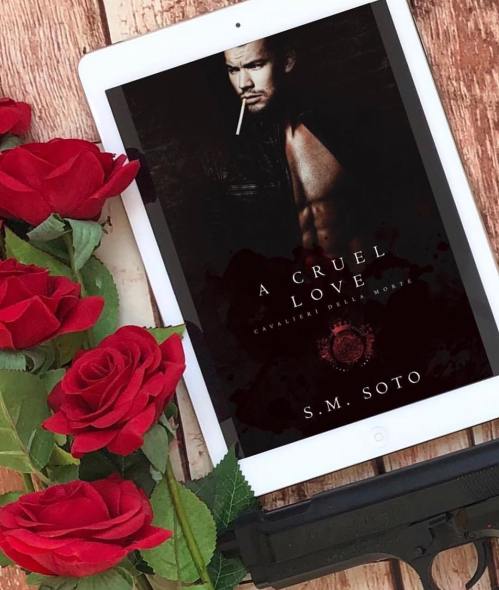 Grab your copy of A Cruel Love now! 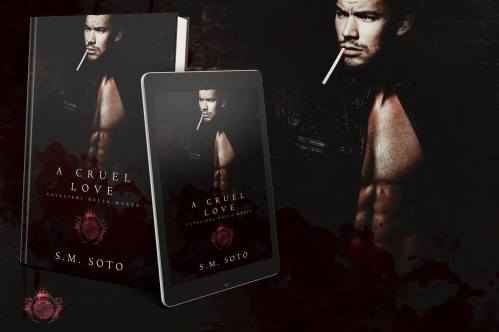 Also available in the 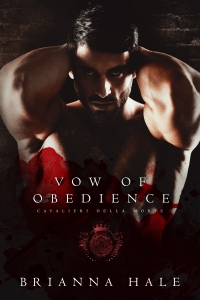 Vow of Obedience by Brianna Hale 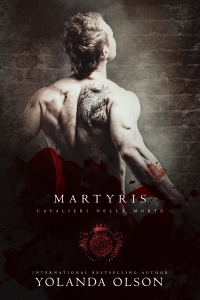 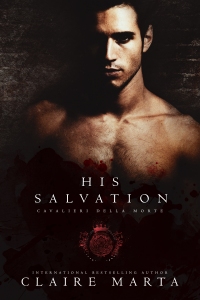 His Salvation by Claire Marta 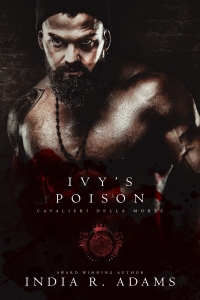 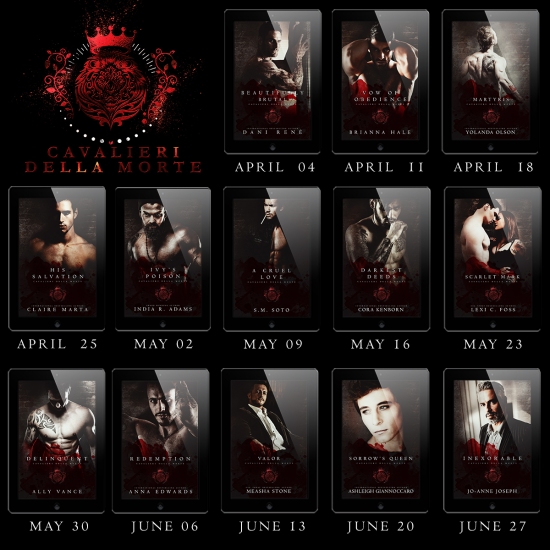 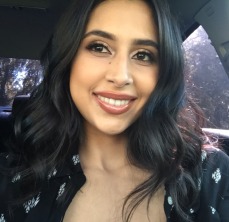 S.M. Soto was born and raised in Northern California where she currently resides with her son.

Her love for reading began when she was a young girl, and has only continued to grow into adulthood. S.M. lives for reading books in the romance genre and writing novels with relatable characters.

She refers to herself as a bit of a romance junkie. S.M. loves to connect with readers and eat copious of donuts that will surely lead to her demise (carbs are life).

8 thoughts on “A Cruel Love by S.M Soto is LIVE! Check out my review and don’t forget to grab your copy now!”