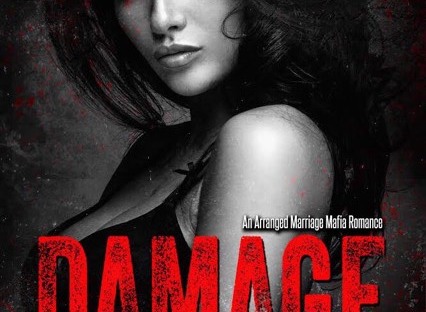 ❝ We’re a match made in hell. Stephan and I.❞

He took me to exact his revenge. I went from being a pawn to my father to being a pawn to Stefan. The only difference is I have a ring the size of a boulder on my finger and a husband I don’t want.

And the hardest part is I thought he was different. I thought I was falling in love.

I guess my father was right. I’m not a very smart girl.

Stefan is a powerful man. He doesn’t play nice, not if you’re his enemy. But I’ve learned one thing about my husband.

He takes care of what’s his.
And I am his.

His enemies have become my enemies, but he’ll never let anyone hurt me. He’s fiercely protective. It’s the predator inside that scares me.

❝ She is who she is. The devil’s daughter. And I just brokered my own deal. I’ve stolen her. And I’m not finished yet.❞

Damage is book number two and the conclusion to the Collateral Damage duet by Natasha Knight. This is a duet so Collateral and Damage will need to be read in order. There are a couple of triggers, so if you are sensitive to questionable consent or violence, this duet may not be for you. Collateral Damage duet is the first thing I have read from this author, and I am a FAN for sure now!! Collateral left off on a nail-biting cliffhanger that had me about ready to throw my Kindle across the room. Ever since I have been counting down the days until I could get my hands on Damage. If you thought there were secrets and twists and turns in Collateral, then you haven’t seen anything yet.

Told in dual POV, Damage picks up where Collateral left off and we are submerged back into Stefan Sabbioni’s world.

Gabriela’s quest for freedom is thwarted placing her right into the hands of unexpected enemies.

❝ Out of the frying pan and into the fire.❞

Stefan will stop at nothing to get his fiance back by his side and those who stand in his way will pay with their lives.

❝ My protector and my predator in one.❞

But with Stefan distracted with Gabriela it gives his enemies the perfect opportunity to slide in undetected.

What happens when someone else seeks the power that Stefan has?

Secrets will be revealed and loyalties will be put to the test.

❝ I’m not sure what’s more beautiful,” she starts. “The sunsets or the sunrises.” “Maybe it depends on the day. If you need a beginning or an ending.❞

Betrayal, greed, vengeance, and secrets Damage had it all! From the very first page, we are thrust right into the action and the jaw-dropping suspense that will keep you flipping pages to find out what happens next.

Gabriela still has her attitude and is determined to defy Stefan every single step of the way. Her walls are still a mile high and every time Stefan starts to chip away at them something happens and she builds them back up higher all over again. But this time around, we do see a bit of a softening towards Stefan than we did in Collateral after everything that he does for her. Proving time and time again that he will protect her at all costs. Which is exactly what Gabriela needs when enemies are everywhere and she has no idea who to trust. The only thing I found frustrating at times, was that instead of trusting her instincts Gabriela seemed to place her trust into almost ANYONE, EXCEPT for Stefan. Even ones who had already hurt her.

❝ Because the way she makes me feel, this possessiveness that burns inside me when I look at her, think about her, it’s not supposed to be this way.❞

Stefan Sabbioni 😍 I can’t even say his name without blushing… my oh my that man! Stefan is a powerful man and he has no problems using his power to make sure that Gabriela is protected. Gabriela was supposed to be nothing but collateral damage, paying for the sins of her father, just another chess piece in a game that she was a pawn in. But NOTHING about his reluctant bride to be was as he expected and he is falling for her more each day. The only problem is… the more he cares for her, the more his enemies can use her against him. Loving Gabriela is dangerous, but it’s already too late…

❝ You are the most precious of pawns.❞

❝ And everyone knows it. I’ve underestimated my enemies.❞

❝ I care about you, Gabriela. You are precious to me. And they all know it.❞

The romance aspect was a bit of a slow burn considering how the relationship between Gabriela and Stefan started but the intense chemistry was ALWAYS present between them from the very start. So when the fire started, it blazed! Throughout the duet, we have watched the relationship between them evolve and grow into something… more. I absolutely loved seeing them actually fall in love this time around. I think in Collateral the lust was very present, but in Damage the love was most definitely there.

That ending. WOW. There were a couple of things that I had guessed, I just KNEW I was right about a certain character (if you follow my reviews, I really hope I didn’t spoil it for ya!) but I knew right from the get-go that something was just “off” with that one… But there were others that I NEVER saw coming and had my jaw dropping to the floor!

This duet was my first read from Natasha Knight and she has surely made me a fan. I already have Devil’s Bargain loaded on my Kindle ready to go after I catch up on a few more ARC’s. Whatever she releases next, SIGN ME UP!

If you are an arranged marriage, mafia romance, romantic suspense reader, then check out the Collateral Damage duet! I most definitely recommend!

❝ I have no intention of leaving you alone. I love you, Gabriela. There’s nothing more precious to me than you. I love you.❞

⭐️⭐️⭐️⭐️ 𝟙/𝟚 – Collateral left off on a nail-biting cliffhanger that had me about ready to throw my Kindle across the room. Ever since I have been counting down the days until I could get my hands on Damage. If you thought there were secrets and twists and turns in Collateral, then you haven’t seen anything yet. Betrayal, greed, vengeance, and secrets Damage had it all! From the very first page, we are thrust right into the action and the jaw-dropping suspense that will keep you flipping pages to find out what happens next. HIGHLY RECOMMEND!

🔥🔥🔥🔥 – HOLY FREAKIN HOTNESS! Things started off slow because of the way these two got together but my oh my when it took off… SHEESH! That mouth on Stefan was dirty enough to make even ME blush!

🌪ℂ𝕝𝕚𝕗𝕗𝕙𝕒𝕟𝕘𝕖𝕣 𝕎𝕒𝕣𝕟𝕚𝕟𝕘 – Nope, no cliffhanger. The duet is complete and was all wrapped up in a beautiful HEA! I AM really hoping though that there a future book about a secondary character… I haven’t heard anything but with the way things ended, I’m still holding out hope.

USA Today bestselling author of contemporary romance, Natasha Knight specializes in dark, tortured heroes. Happily-Ever-Afters are almost always guaranteed, but she likes to put her characters through hell to get them there. She’s evil like that.