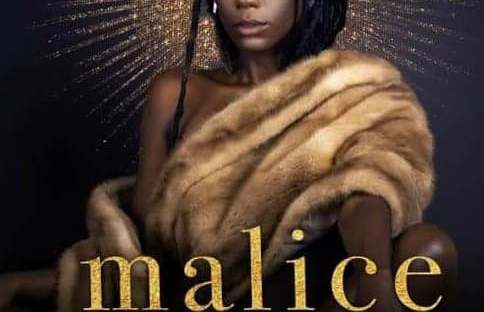 𝑺𝒉𝒆 𝒄𝒂𝒍𝒍𝒆𝒅 𝒎𝒚 𝒏𝒂𝒎𝒆.
𝑺𝒖𝒄𝒉 𝒂 𝒑𝒂𝒕𝒉𝒆𝒕𝒊𝒄 𝒍𝒊𝒕𝒕𝒍𝒆 𝒈𝒊𝒓𝒍, 𝒃𝒆𝒈𝒈𝒊𝒏𝒈 𝒇𝒐𝒓 𝒔𝒂𝒍𝒗𝒂𝒕𝒊𝒐𝒏 . . .
𝑺𝒉𝒆 𝒄𝒂𝒍𝒍𝒆𝒅 𝒎𝒚 𝒏𝒂𝒎𝒆.
𝑰𝒈𝒏𝒐𝒓𝒂𝒏𝒕 𝒐𝒇 𝒕𝒉𝒆 𝒄𝒐𝒔𝒕,
𝑶𝒇 𝒘𝒉𝒂𝒕 𝑰’𝒅 𝒉𝒂𝒗𝒆 𝒕𝒐 𝒕𝒂𝒌𝒆,
𝑺𝒉𝒆 𝒄𝒂𝒍𝒍𝒆𝒅 𝒎𝒚 𝒏𝒂𝒎𝒆.
And when I bled her dry,
Gorged on her precious soul,
Ruining us both,
It was 𝑚𝑒 she blamed.
Everything she became is thanks to me.
Everything I’ve lost is thanks to her.
Two centuries of starvation.
Endless seconds of obsession.
A punishment I deserve.
A torment I refuse to accept anymore.
The Voodoo Queen of New Orleans owes me, and she’s made the second greatest mistake of her life.
Her first? When she begged me to drag her from her pit of misery.
Now she’s dared to show herself to me again.
I will spread through her, infect her in the horrible ways she’s done to me. When it’s all said and done, I will remind her that she started this.
Marie set us on this path.
𝑺𝒉𝒆 𝒄𝒂𝒍𝒍𝒆𝒅 𝒎𝒚 𝒏𝒂𝒎𝒆.

Malice by N. Isabella Blanco is a dark paranormal romance novella releasing in the Possessed by Passion Box-set. There are no words to describe this one without giving too much away so I’ll just say this, Malice is a unique spin on Marie Laveau, the voodoo queen, and Baron Samedi, the voodoo God of Death. As of yet, I haven’t had a chance to read any of the other short stories included in the box-set but I have a feeling I will be once it’s released and I’ll come and update my review then!

After being called to, by what he thinks is a mortal woman, the Baron doesn’t just take from her as he normally would. Unbeknownst to him, she takes something from him too… After their one night together, the Baron is forced to watch from a distance, never being able to contact Marie directly. But the Baron never gives up on Marie. Continuing to follow her from afar throughout her life until their paths cross once again… centuries later.

I’m not really familiar with any voodoo history but I must admit, Malice has had me Googling my heart out! Some of these stories are absolutely amazing and Blanco’s spin on the real Marie and Baron’s stories is out of this world. I love that Blanco did her research before writing this story to try and throw in a few REAL facts, like the real Maria Laveau’s husband’s name was Jacques, and she DID in fact have two daughters whose disappearance was a mystery, and later Jacques also disappeared under mysterious circumstances… And the Baron, the outfit, even the cigar. Anyways, let me stop gushing and just say THANK YOU ISABELLA for doing your research and depicting both of these characters amazingly well while still putting your own amazing spin on the story.

With that being said… let’s get to the facts!

𝗵 𝗥𝗮𝘁𝗶𝗻𝗴: ❤️❤️❤️ – Marie Laveau, a voodoo priestess who calls to the Baron for help. Although we saw her living her life, there wasn’t enough of Marie for me to get a feel for her.

𝗜𝗻𝘀𝘁𝗮-𝗹𝗼𝘃𝗲?: I wanted to say no, it was more insta-lust but then I started thinking about it… after ONE time together this man stalked her from afar for CENTURIES so I’m going to have to say YES.

𝗥𝗼𝗺𝗮𝗻𝗰𝗲 & 𝗦𝘁𝗲𝗮𝗺: 🔥🔥 – I would have liked to be able to give this one a higher rating but it was the romance and the steam that held it up for me. There were really only two steamy scenes and the romance… a large portion of the book is just the Baron’s POV as he follows along with Marie’s life, while they aren’t even together. It was only in the last couple of chapters that the two actually came back together again. I would have liked to see more romance between the two.

𝗗𝗲𝘀𝗰𝗿𝗶𝗽𝘁𝗶𝘃𝗲 𝗦𝗲𝘅?: Again, only two steamy scenes but yes it is descriptive.

𝗦𝗲𝗽𝗮𝗿𝗮𝘁𝗶𝗼𝗻: Yes, the two only spend one night together before they are separated for centuries.

𝗢𝗪/𝗢𝗠 𝗱𝗿𝗮𝗺𝗮: I mean Marie is married to another man? Lol, but if you ask me if there was “drama”, no.

𝗙𝗮𝘃𝗲 𝗖𝗵𝗮𝗿𝗮𝗰𝘁𝗲𝗿?: Remy, he’s a mouthy, ignorant jerk most of the time but I love it.

𝗛𝗘𝗔?: I want to say yes. The story does NOT leave off on a cliffhanger but as I mentioned above, the author does say we will be seeing more from Remy and Marie so maybe it’s just a happily for now….

𝗪𝗼𝘂𝗹𝗱 𝗜 𝗿𝗲-𝗿𝗲𝗮𝗱 𝘁𝗵𝗶𝘀 𝗯𝗼𝗼𝗸? I can’t say that I would re-read this one. It was a very short story and I usually don’t read novella’s for that reason alone because I don’t feel like I can really get any depth out of the characters in short reads. That wasn’t the case with Malice. The characters had plenty of depth. Unfortunately, it was the relationship between the two characters that I needed more of. While there was no doubt that Remy loved Marie, I’m not so sure Marie was pinning away for him…

𝗪𝗼𝘂𝗹𝗱 𝗜 𝗿𝗲𝗮𝗱 𝗺𝗼𝗿𝗲 𝗶𝗻 𝘁𝗵𝗲 𝘀𝗲𝗿𝗶𝗲𝘀? Absolutely, as I stated above Malice caused me to go and do my research about both of the characters, and I would be very interested in reading more about them, as well as the other characters that are mentioned in the book.

𝗪𝗼𝘂𝗹𝗱 𝗜 𝗿𝗲𝗰𝗼𝗺𝗺𝗲𝗻𝗱 𝘁𝗵𝗶𝘀 𝗯𝗼𝗼𝗸? Yes. Although it wasn’t my favorite book by Blanco, it was still a very good story! If you are a fan of novellas who enjoy dark paranormal romances, then you should definitely check out Malice!

Grab your copy of Malice in the Possessed by Passion Box-Set today!

N. Isabelle Blanco is the Amazon Bestselling Author of the Allure Series, the Need Series with K.I. Lynn, and many others.

At the age of three, due to an odd fascination with studying her mother’s handwriting, she began to read and write. By the time she’d reached kindergarten, she had an extensive vocabulary and her obsession with words began to bleed into every aspect of her life.

That is until coffee came along and took over everything else.

Nowadays, N. spends most of her days surviving the crazy New York rush and arguing with her characters every ten minutes or so, all in the hopes of one day getting them under control.

ARC Review | Say I’m the One, All of Me Duet #1 by Siobhan Davis | Available Now!