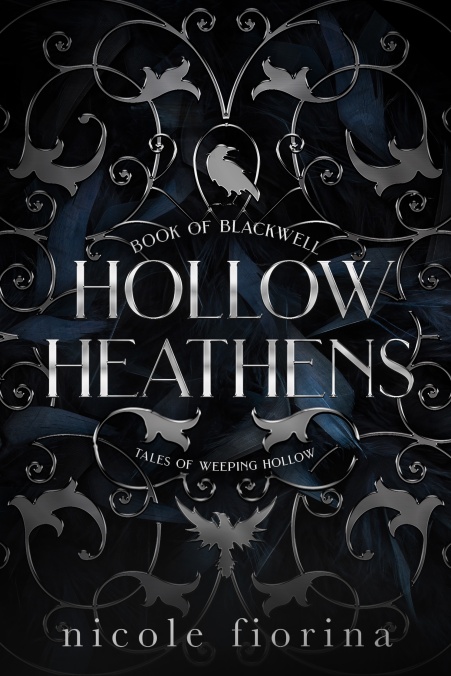 Blurb:
Once upon a time, there lived a girl named Fallon who was taken far away from home shortly after she was born.
A home that held more than strange traditions and bizarre superstitions.
Twenty-four years later, she returned to Weeping Hollow, a town she’d only heard about in stories during restless nights under a marble moon, in the middle of the night to take care of her last living relative.
They called the nosy mortician a freakshow–a ghastly thing. They said I couldn’t go near her.
Still, there was this aching pull to Fallon Grimaldi that I couldn’t escape.
A nostalgic pull as if we’d been here before.

Once upon a time, there lived a mysterious boy named Julian with a curse as old as centuries wrapped around his soul.
He was one of the four Hollow Heathens, the very dark creatures who caused the town’s people to live in fear.
And the Blackwell name was stained with darkness and death.
They called him a monster. Cold and hollow. They said I shouldn’t go near him.
Still, there was this aching pull to Julian Blackwell that I couldn’t escape.
A nostalgic pull as if we’d been here before.

Nicole Fiorina is an independent author, debuting her first book, Stay With Me, the first novel in a series. She lives in Florida with her loving husband, Michael, two children,

She doesn’t write because she likes to, she writes because she needs to, but it wasn’t until a car accident she suffered from (and recovered from), when she received that push to follow her dreams. Her writing style is unapologetic and emotional, striving to push buttons, hearts, and limits. Nicole’s books fall under New Adult, Contemporary Romance, as well as fantasy in the near future.

A lover of music, especially classic rock, she can rap most Eminem songs, dances, dabbles on the piano, and likes to use power tools and a paintbrush. She’s addicted to coconut berry Red bull, coffee, and root beer, and makes sure to force down water to appease her mother. When she’s not writing, she’s probably chauffeuring her kids around, at family gatherings, or sleeping.