I shouldn’t be writing this.

It’s not as if I’m ever going to send you this letter and there are a million reasons why.

First of all, I was sent to St. Mary’s School for Troubled Teenagers – an all-girls reform school – as a punishment for a petty, totally inconsequential crime. Not to ogle the principal’s hot son around the campus.

Second of all, you’re a giant jerk. You’re arrogant and moody and so cold. Sometimes I think I shouldn’t even like you.

But strangely your coldness sets me on fire.

The way your athletic body moves on the soccer field and the way your powerful thighs sprawl across that bike of yours, make me go inappropriately breathless.

But that’s not the worst part.

The worst part is that you, Arrow Carlisle, are not only the principal’s hot son.

You also happen to be the love of my sister’s life.

And I really shouldn’t be thinking about my sister’s boyfriend or rather fiancé (I overheard a conversation about the ring that I shouldn’t have.)

How could you NOT want to read this book?!?!

⭐️⭐️⭐️⭐️ 𝓞𝓿𝓮𝓻𝓪𝓵𝓵 𝓡𝓪𝓽𝓲𝓷𝓰: My Darling Arrow, a contemporary, angsty, forbidden romance by Saffron A. Kent. Gahh this book. The blurb hooked me the very first time I read it and I think I may have signed up for an ARC like four times because I couldn’t remember if I had or not and I was dang sure not missing out on this one! I needed it quick, fast, and in a hurry! My Darling Arrow has a little bit of everything a romance reader loves, the forbidden aspect (sister’s boyfriend), a childhood crush, a tiny bit of an age gap, enemies to lovers, ALLL the angst, and of course… unrequited love. Not to mention the dirty talking alpha a-hole and the steam… oh my the steammm! 🤤🥵

When Salem was ten years old her mother passed away and she and her older sister Sarah moved in with a long time friend of her mother, Leah Carlisle, and her son Arrow.

Salem has been in love with Arrow since the first time she saw him at ten years old. But Arrow didn’t SEE her… he saw her sister.

Since then, Arrow’s only had eyes for soccer and Sarah.

Eight years have gone by, Arrow’s a big shot soccer player in LA, otherwise known as ‘The Blonde Arrow’ and Salem… Salem is still in love with Arrow.

But after overhearing a conversation between Arrow and his mother, she knows she needs to get her witchy self away from the happy couple. So she steals some cash and takes off. She doesn’t get far though and when she’s caught she’s sent to St. Mary’s School for Troubled Teenagers—an all-girls reform school.

When Arrow suffers an injury his life comes to a screeching halt. Now that he’s out of the game for the rest of the season his mom convinces him to come down from LA to the school she’s the principal of to be a temporary soccer coach while he’s recovering.

I’ll give you one guess of what school that is? You guessed it, St. Mary’s.

Now Salem is face to face with the love of her life and the object of her obsession, the same boy she’s moved mountains to stay away from for the past eight years.

But Arrow’s not the same sweet, perfect boy that Salem remembers… he’s broken, and Salem’s determined to fix him.

THAT’S IT! That’s all you’ll get from me regarding the plot of the story, it would be wayyy to easy to spoil it and I definitely don’t want to do that. This is just one of those ones you are going to need to check out yourself!

If you are a romance lover of pretty much ANY genre, or a Saffron Kent fan, then you aren’t going to want to miss My Darling Arrow!

Saffron Kent’s stories are original, emotional, steamy, and filled with so much angst that they’ll make even the strongest of romance readers tear up, My Darling Arrow is no different. I love that Kent’s heroines are usually the ones who pursue the male protagonist, you don’t see that happen very often in romance so when I do, I appreciate it more. I can already tell that this new world of St. Mary’s Rebels that Kent has created is only going to get better and I can’t wait to see what else she has in store for us. Oh and that playlist?! 😍

💙 (𝓗) 𝓗𝓮𝓻𝓸: Arrow Carlisle, has always been Mr. Perfect… perfect grades, perfect game, perfect girl, perfect everything. You know the type, every guy wants to be him, every girl wants to be with him. A perfectionist in every way, personal and career-wise. But that’s actually not who Arrow is at all, that’s who he’s been conditioned to be.

That person is ‘The Blonde Arrow’ but ARROW, well he’s not perfect at all. He’s broken. And Salem is the type of perfectly unperfect that he needs to help shake up his idea of perfect.

The character growth in Arrow throughout the book was my favorite part of the story, well besides Arrow’s dominant dirty talk and the steam (Priorities, #sorrynotsorry 🤷‍♀️) Don’t get me wrong, this new Arrow is broody, rude, and sometimes downright mean. Or in other words, he’s an a$$hole! But he’s so much more than that. He may act like a possessive caveman but he’s also the type of guy to write Salem notes because he knows how much it means to her.

When I first started this book, I had an idea of what type of guy Arrow was and I really didn’t think I was going to like him, I am happy to admit that I was completely wrong.

❤️ (𝓱) 𝓗𝓮𝓻𝓸𝓲𝓷𝓮: Salem Salinger has never been ‘perfect’, in fact, she’s the farthest thing from it. She’s more of the wild and crazy mess type and can’t follow the rules to save her dang life. She’s rebellious, reckless, and a little bit witchy. But this quirky girl is also a sweetheart. One thing I really liked about Salem is how selfless she is. She didn’t try and break Arrow and Sarah up, in fact, she even tries to get them back together. Even if she couldn’t have him, as long as he was happy that’s all that mattered, even if it hurt her in the process.

Probably not going to be a popular opinion butttt, Salem wasn’t my fave heroine. 🤷‍♀️ Although she was extremely mature for her age, in the way that she thinks things through, etc. she was just too… I don’t even know. I really don’t know. I can’t explain it I just couldn’t connect with her. 😕 Maybe just a little too lovesick and needy? Although, I mean after getting to know Arrow, I could totally see why. LOL 😘 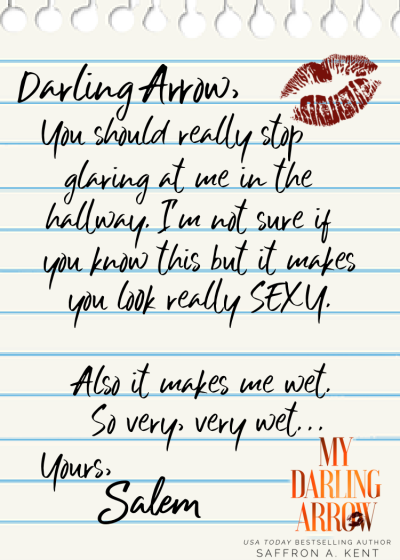 🔥🔥🔥🔥 𝓡𝓸𝓶𝓪𝓷𝓬𝓮 & 𝓢𝓽𝓮𝓪𝓶: Salem and Arrow aren’t perfect together, in fact, they are complete opposites but and it makes them perfect for one another. She’s light, he’s dark. She’s messy, he’s not. She’s his sweetheart, he’s her Darling. *sigh* Their love is messy, forbidden, chaotic, and totally complicated but they are exactly what the other needs and somehow it just works. As far as the steam… Ummm, did I mention Arrow and his dirty talking mouth??! Oh, I didn’t? Well, let me tell ya now, make sure you have a change of panties because this dirty talking alpha is HOT!

❥𝟚❥ 𝓢𝓮𝓬𝓸𝓷𝓭𝓪𝓻𝔂 𝓒𝓱𝓪𝓻𝓪𝓬𝓽𝓮𝓻𝓼: We met three of Salem’s friends and fellow residents of St. Mary’s, Wyn, Poe, and Callie. I’m interested in more of all three of them but Callie… I am really, REALLY looking forward to more of her and her dark, mysterious, gorgeous villain. Plus, I’m all about the baby mama drama and teenage angst so BRING IT ON!

I am loving this new world and the characters of St. Mary’s, I can’t wait to read more from this group of St. Mary’s Rebels! 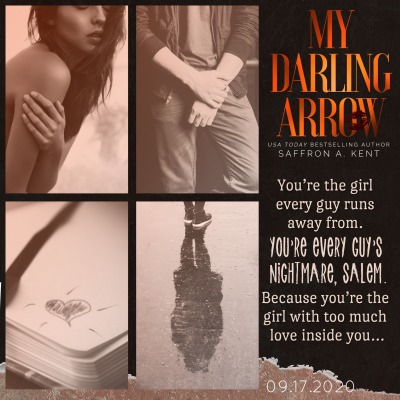 🌪𝓒𝓵𝓲𝓯𝓯𝓱𝓪𝓷𝓰𝓮𝓻 𝓦𝓪𝓻𝓷𝓲𝓷𝓰: Nope, My Darling Arrow is standalone so it wraps up nicely in a sweet little epilogue AND an even better BONUS epilogue. BUT, it is part of Kent’s St. Mary’s Rebels Series, and after that sweet little epilogue wraps up Arrow and Salem’s story… Kent decides to add a little more torture to the mix and throws in a bit of dialogue between the characters of the next St. Mary’s Rebel’s installment!!! So, for that reason, I’m going to give this one two cliffy tornadoes. Come on 2021, I am already ready for Callie and Reed’s story, A Gorgeous Villian. Go check out that blurb you guys!!!

⚠️ 𝓣𝓻𝓲𝓰𝓰𝓮𝓻 𝓦𝓪𝓻𝓷𝓲𝓷𝓰: Nope. I didn’t see anything that stood out to me as a trigger. Just because I know some people are really confused by the blurb and the forbidden part of the story and have chosen not to read My Darling Arrow because they think it’s something that it’s not, THERE IS NO CHEATING… well, let me rephrase that actually, ARROW DOES NOT CHEAT ON SARAH WITH SALEM!

If audio is more your style, then you’re in luck because not only did the e-book of My Darling Arrow release today but so did the audio!

I don’t know why I ask that but it simply comes out and his eyes narrow even more.

He bends down even further until the rim of his cap is grazing my forehead. Until his lips are so close that when he opens his mouth to reply, I feel him writing those words on my skin, “No”

I swallow, my heart banging in my chest. “Why?”

“Because I want you to keep being who you are. Who you’ve always been”

“The little sister. The one who hangs out in the background and doesn’t get seen. The one who keeps her head down and doesn’t make a noise. And the one who definitely doesn’t demand my attention. So are you going to walk or do I have to make you?”

Saffron A. Kent is a Top 100 Amazon Bestselling author of Contemporary and New Adult romance.

More often than not, her love stories are edgy, forbidden, and passionate.

Her work has been featured in Huffington Post, New York Daily News, and USA Today’s Happy Ever After.

She lives in New York City with her nerdy and supportive husband, and a million and one books.