He was my foster brother.

He swore to protect me.

I’m an open box of passé photographs, snapped in chaste daylight, but filtered in sepia. I’m the past that he tried to forget, and he was the future I needed. When he left four years ago, I screamed for him every night. But then it all stopped. My screams were suddenly muffled by cruelty, and further coaxed by pain.

But he has come back. He’s not the cute big brother I had a furtive crush on, or the bad boy, rich brat that I hated to love.

He answers to Sicko.

So, let me start off real quick by saying… I really shouldn’t see one single review saying “Ohhh myyy goshhh this book was wayyy to dark!” I mean come on, if the author’s note didn’t give you adequate enough warning, then the “To my darkness. Because the bitch really came out to play with this one.” book dedication sure as hell did!!! With that said, let’s get on with it, shall we?

Sicko, the epic dark and taboo, new adult, MC romance by Amo Jones is one story you will NEVER forget! If you are looking for a dark and dirty taboo treat, look no further! I’m never truly ready for an Amo read… but I was totally, completely, entirely, wholly, unprepared for Sicko. It’s unlike anything I ever could have imagined. Whatever you think is going to happen, just erase it from your mind because this book is about to blow you away! It’s been two days since I finished reading and I’m STILL absolutely speechless and still have no idea how to put my thoughts about this one in order without giving too much away. All I can say, Sicko is one hell of an epic ride, so grab a couple of tissues along with a change of panties and GET THIS BOOK RIGHT NOW!!!

Jade was abandoned as an infant and soon after was adopted by the Kane family who already had a two-year-old son, Royce.

The story starts off with Royce and Jade as teenagers, Royce 18, and Jade 15.

Very quickly we see that the relationship between Royce and Jade is much, much, more than just your average brother and sister relationship. Royce is very, VERY protective of Jade, and their interactions with each other straddle the very edge of the line of what’s appropriate for a brother and sister…

Their relationship is very co-dependent so when Royce suddenly disappears without a trace, leaving Jade behind… and she breaks without him.

Four years later… Royce is back. He walks in as if he had never left. But the Royce that walks back into Jade’s life is far from the boy she remembers. Royce has changed since he’s been gone… but he’s not the only one.

Life hasn’t been kind to Jade since her biggest protector left and Royce is about to find that out the hard way that the girl he left behind no longer exists.

Shew! You guys… this one was… I’m still speechless. What an epic read. The first few chapters of Sicko were released in the Love Loyalty and Mayhem MC Anthology and although I was soo excited and wanted to get my hands on it ASAP, I held out. I am sooo glad that I did! There is absolutely NO WAY I would have been able to wait for the conclusion of this story!

Amo Jones is a fucking genius and her dark mind without a doubt shined with this one! Sicko was everything you expect from Jones and so, so much MORE. The MC world, the forbidden aspect of Royce and Jade, the dark, depraved, wicked and sinister scenes, the suspense of not knowing WHO…, the steam, I could go on and on… and ON about this book! I’ve said it before and I’ll say it again, Amo Jones is a master storyteller who knows exactly how to write a story that submerges you so, so deep into it that you’ll feel as if you are a part of that world and connected to those characters and that’s EXACTLY what she did with Sicko. 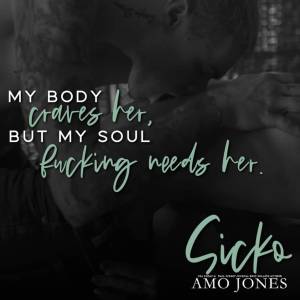 Royce Kane, he’s protective, he’s possessive, he’s savage, and he’s alpha as alpha can get! But his love and complete devotion to Jade shows us a much different side to him. Although he’s never really “soft” he does show that SHE is his vulnerability. He would do anything for her and he proves that without a doubt. Plus… he calls her ‘Duchess’ *sigh* 😍 Is that not the cutest pet name ever?!

Jade. This girl. I can’t even put into words how strong of a character Jade is. At first… that’s not what I thought of her. And I have to say, I was soo wrong about Jade! She’s feisty, she’s fierce, and her quiet strength is something every woman hopes to have. Without a doubt, Jade’s one of my all-time favorite heroines, EVER!

Jade and Royce… the chemistry between them was undeniable even when they were kids. But now that they are all grown up… HOLY HOTNESS! No joke, the steamy scenes between Jade and Royce were some of the HOTTEST scenes I think I’ve EVER seen! No matter the push and pull, the love, the hate, these two are soulmates, and undoubtedly there was nothing that could keep them apart. #YouCantFuckWithFate

The secondary characters… gosh there are so many that were just as important to this story as Royce and Jade. They honestly made this story what it is. Lion, Wicked, and the rest of the guys… I’d love to see what happens now in their lives. (Hint, Hint Amo!!) 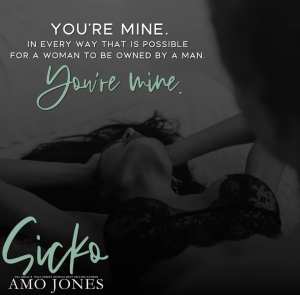 If you are a dark romance or MC romance lover, who likes your romance a little on the forbidden/taboo side with a touch of sinister along with it… then you’re going to want to get your hands on this one ASAP. I can’t recommend Sicko enough!

🌪🌪 𝓒𝓵𝓲𝓯𝓯𝓱𝓪𝓷𝓰𝓮𝓻 𝓦𝓪𝓻𝓷𝓲𝓷𝓰: Soo there’s not really a cliffhanger since Sicko is standalone… BUT we met several characters from the Wolf Pack MC that have their own stories to tell. So I’ll give this one two cliffhanger tornados because I have a feeling (or maybe it’s wishful thinking?) that Amo Jones is nowhere even close to being done with the Wolf Pack MC world. Keeping my fingers crossed! 🙏

⚠️ 𝓣𝓻𝓲𝓰𝓰𝓮𝓻 𝓦𝓪𝓻𝓷𝓲𝓷𝓰: Sicko is a DARK romance. As I said earlier, there is an author’s note, AND the dedication lets you know right away that this will NOT be an easy read. There are difficult subjects that could be considered triggers. I can’t list them because if I did it could give away MAJOR spoilers, so if you would like to know more, feel free to DM me!

Grab your copy of Sicko today!

She likes cake, loves wine, and her religion is magic.

She’s a profound work-a-holic, but when she’s not writing, you can find her chilling with her kids & partner at the nearest beach, with a cocktail in her hand.

New Zealand is not a state of Australia and rugby is the best sport ever played.