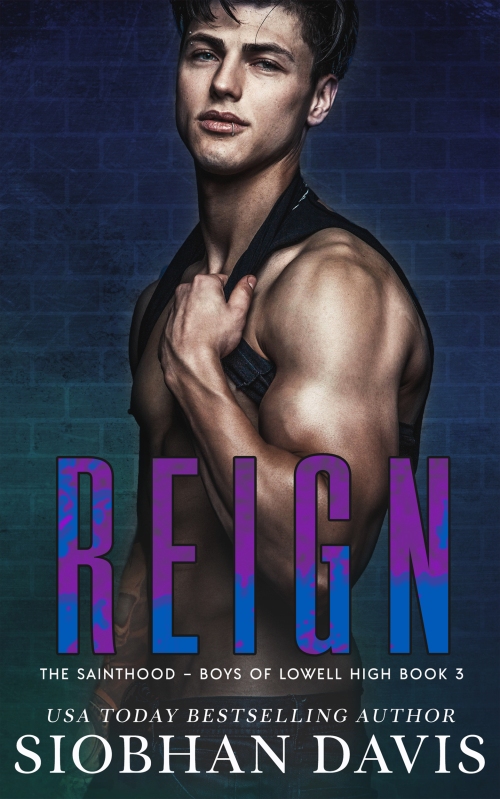 Everything changed after the attempt on my life, and now, I’m more determined than ever to crush my enemies until they lie in pieces at my feet.

Sinner believes he has pushed me into a corner, but he underestimates my thirst for revenge.

Nothing will stand in my way.

And I’m no longer in this alone. Saint, Galen, Caz, and Theo have won my trust and my heart. Together, we are an unbreakable team and an unstoppable force.

Staying one step ahead of the game is critical to our success, so we’ve little choice but to partner with the most unlikely of allies. The situation is tense and fraught with danger, and it’s not just our lives at stake.

Everything rests on finding the evidence that links The Sainthood to Daphne Leydon’s kidnapping and murder, and we’re running out of time.

Sinner thinks war has already come to Lowell. But he has overlooked his deadliest enemy and the challenge that comes from within.

We won’t stop until he’s defeated and we have taken his crown.

Sinner is going down.

⭐️⭐️⭐️⭐️⭐️⭐️ 𝟔/𝟓 𝓞𝓿𝓮𝓻𝓪𝓵𝓵 𝓡𝓪𝓽𝓲𝓷𝓰: Reign, the epic, edge of your seat, nailbiting, third, and FINAL installment of The Sainthood – Boys of Lowell High series by Siobhan Davis! I am sooo not ready to leave this world or these characters! I was first introduced to the reverse harem genre in Davis’s standalone, Surviving Amber Springs. Ever since I have been a HUGE fan of RH and was excited to see Davis diving back into that world again. I fell head over heels for Lo and her guys and I’m more than a little sad to be saying goodbye to them, but as bittersweet as it is I honestly couldn’t have asked for more from the conclusion of their story. As per usual, BRAV-FREAKIN-O Ms. Davis.

💙 (𝓗) 𝓗𝓮𝓻𝓸: The Sainthood Boys. Saint and Galen Lennox, Caz Evans, and last but certainly not least, Theo Smith. As I said in my previous review of Rebellion, each one of these guys is extremely different but yet they bring a certain something to the dynamic that makes their little group unstoppable. I have thoroughly enjoyed watching this group evolve into the beautiful and fierce companions that they are now.

❤️ (𝓱) 𝓗𝓮𝓻𝓸𝓲𝓷𝓮: Harlow Westbrook is probably one of my favorite heroines to date! She is a bad a$$ chick who although has four guys that would lay their lives down for her, she doesn’t need nor wants them too. She’s the type of girl that will go down swinging right beside them and never behind them. In The Sainthood – Boys of Lowell High series, Lo continues to show exactly why she is the center that these guys revolve around.

🔥🔥🔥🔥🔥 𝟓/𝟓 𝓡𝓸𝓶𝓪𝓷𝓬𝓮 & 𝓢𝓽𝓮𝓪𝓶: Yet again I’m going to say the exact same thing I said in the first two books, Harlow has NOT ONE, but FOUR dark, delicious, and demanding guys who are all at her beck and call and willing to do absolutely ANYTHING for her. I loved that there were certain things that were experimented with this time around and although I don’t want to give too much away usually I don’t care for “co-mingling” between the guys in a harem… I feel like it tends to change the dynamic of the entire group… that’s NOT the case AT ALL here. Again, just forgo the panties ladies, you won’t be needing them!

🌪 𝓒𝓵𝓲𝓯𝓯𝓱𝓪𝓷𝓰𝓮𝓻 𝓦𝓪𝓻𝓷𝓲𝓷𝓰: Nope, no cliffhanger! Reign is the conclusion of The Sainthood – Boys of Lowell High series!

⚠️ 𝓣𝓻𝓲𝓰𝓰𝓮𝓻 𝓦𝓪𝓻𝓷𝓲𝓷𝓰: There are difficult subjects that could be considered triggers. The Sainthood-The Boys of Lowell High is a series based around GANGS and GANG activity… just from that, you should be able to figure out that there are some uh-hmm… activities, that could be considered triggers. But just in case you need me to spell it out, i.e drugs, guns, murder, dubious consent, etc. are involved. If you would like to know more about what those subjects are, feel free to DM me!

If you are looking for a read filled with action, suspense, smoking hot steam, hilarious banter, revenge, and forgiveness then I highly recommend The Sainthood – Boys of Lowell High Series and if you fall in love with this one as much as I did, don’t forget to check out the Rydeville Elite series by Siobhan Davis as well!

USA Today bestselling author Siobhan Davis writes emotionally intense young adult and new adult fiction with swoon-worthy romance, complex characters, and tons of unexpected plot twists and turns that will have you flipping the pages beyond bedtime! She is the author of the True Calling, Saven, and Kennedy Boys series.

Siobhan’s family will tell you she’s a little bit obsessive when it comes to reading and writing, and they aren’t wrong. She can rarely be found without her trusty Kindle, a paperback book, or her laptop somewhere close at hand.

Prior to becoming a full-time writer, Siobhan forged a successful corporate career in human resource management.

She resides in the Garden County of Ireland with her husband and two sons.