Add to your Goodreads TBR: http://bit.ly/GR-PrincePawn 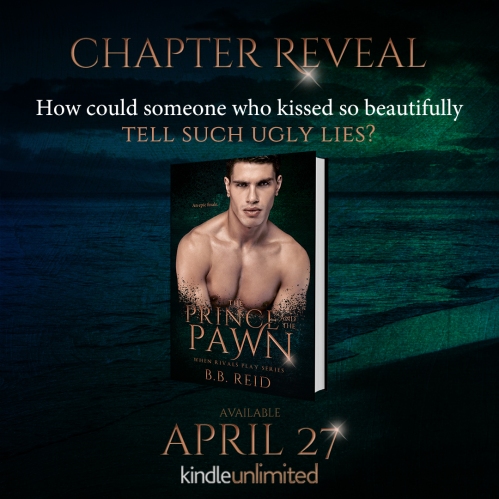 The cool breeze from the ocean slammed into my aching chest the moment I burst through the door. The wind carried with it the salt and water from the sea, blending in with my tears.

There were murmurs and whispers and a few laughs as my former classmates looked on, and I could only guess what they were all thinking.

Did she actually believe him when he said he loved her?

I foolishly believed every word that passed through his lips from the moment he first pressed them against mine. How could someone who kissed so beautifully tell such ugly lies? I looked to the sky as if it had the answers. All I found was the full moon and its callous glow shining down on me like a spotlight. Here she is, it seemed to say, the fool who thought Vaughn Reese had a heart and wouldn’t break hers.

Hearing my name shouted over the music, I rushed down the wooden stairs. I never realized before now how many there were. The stilts the blue beach house sat on were fourteen feet high to protect from flooding. Somehow, despite my blurry vision, I managed not to fall. A broken neck was all I needed to match my broken heart. The moment my sandal-ed feet touched the sand, I looked around in desperation. The parking lot would be the first place my friends would check.

Not ready to face my devastation, I slipped into the shadows underneath the house. I couldn’t outrun them, so I’d hide until they gave up—if they gave up. I held my breath while my tears flowed freely. A moment later, the obscure figures of my friends darted past.

And the smug look on the bitch’s face who’d stolen everything from me.

My cheeks heated in shame as I recalled how I’d turned and ran in defeat. I should have stayed and killed them both. Hindsight really was twenty-twenty.

Swallowing the sob that threatened to spill, I leaned into one of the stilts, wrapping my arms around the beam. With my forehead resting against the cold, damp wood, I closed my eyes. It was the only thing keeping my knees from buckling.

Vaughn had warned me. A year ago and almost every day since, he told me that we could never be, but my arrogance hadn’t allowed me to believe him. That and the way his eyes defied the words his lips had spouted.

I’d chosen to listen to the teachings that a person’s actions spoke louder than words. So, naïvely, I clung to hope. And tonight, Vaughn had shown me the truth.

Seeing him with her, touching her, giving her what only should have belonged to me was more proof than anyone could deny. And the look in his eyes when he finally noticed me witnessing it all…I hugged the sturdy wood tighter when I felt pieces of my heart tumble into the rage building in my gut. As much as it burned, it was still just an ember. Only time would tell when the fire would finally roar. My stomach was twisted in a knot so tight I feared that any moment now, I’d break in half. It was inevitable, wasn’t it?

I was in the midst of inhaling the salted air when behind me, I heard the soft crunch of sand. I froze, humiliated once again that he’d caught me like this—pathetically weeping and irreparably shattered. I didn’t have to turn to know it was him. I hadn’t made a sound. The darkness underneath the house cloaked me entirely. Yet it still didn’t matter.

From the moment our gazes first connected, Vaughn and I became a siren’s song. We’d always be drawn.

With my eyes still closed, I pictured him with his hands tucked inside his jeans, his cold gaze assessing and calculating. Like everyone else, I’d mistaken that look for boredom, but Vaughn was never as disinterested as he was careful. Months of allowing me to hold him close, and I had yet to find out why. I realized then that as much as Vaughn had let me in, I’d only ever had one foot in the door.

“But you’re not—” I squeezed my closed eyes tighter, hating the way my voice broke and how it barely carried over the sound of the waves crashing in the ocean or the music playing from the beach house above us. I still couldn’t find the courage to turn around. “You’re not sorry you did it?”

“And when you said you loved me…are you sorry for that, too?”

“Why should I believe you?” I asked, anyway. It was weird, wasn’t it? Weird that I could argue his point after catching him with his pants down and his dick inside—I dug my fingers into the wood, ignoring the pain. It was more than weird. It was pathetic.

Vaughn sighed, and my guess was because I wouldn’t take the hint he was waving around on a sign the size of a billboard with flashing lights so bright they blinded. Maybe I was still too head over heels to see it. He might not have meant it when he said he loved me, but I had. Love didn’t just fade the moment the other pushed the big red “abort” button. Instead, you’re left standing alone in the place that had once been your Eden and was now your own personal hell.

“So, you put it inside of that bitch instead?” My voice had become granite, and if I weren’t clinging to this fucking beam as if it was a life raft, I would have patted myself on the back. I felt him closing in—felt his warmth, the strength of his muscles, and even the rhythm of his heart as if he’d taken me in his arms and made it all better.

If only he would.

My fists balled against the wood.

“Look at me,” he demanded as if he had the right.

I shook my head, denying him. I was afraid that if I did, I’d see that his heart was no longer mine. A moment later, I felt his hands on my shoulders, gently turning me to face him.

“I made a mistake,” he said once he’d captured my gaze.

I knew he wasn’t talking about tonight. Just as my heart, on its last desperate stitch, begin to splinter, I felt the telling tap of his finger on my shoulder. It was subtle, like a phantom touch, only it was very much real. Immediately, I started to melt into the comfort of his strong arms. The demand to know why he was doing this was poised on my lips when I felt the bite of his fingers keeping me at bay.

His rejection rippled through me, and I no longer cared about his reasons. I closed my eyes, hating him, and wondering how many times I’d have to disgrace myself. How many before I accepted that this was real?

Vaughn and I were over.

But then…how could something that never truly started end?

While Vaughn had been sure to remind me that we weren’t exclusive, he’d often forgotten that fact himself. Once he’d sunk his teeth into me, it became a full-time job scaring off the guys at our school, and when he wasn’t savagely defending his territory, he was attending to my every need. There’d been no time or desire for anyone else.

Pushing him away, I forced my spine to straighten. “It took you a year to figure that out?”

Callously, he shrugged, and I realized the glow that usually shone from his green eyes was gone. The wind ruffled his light-brown hair, and the ache to run my fingers through it as I had so many times before was almost greater than the one in my chest.

“I was looking for something different, and until now, you provided that.”

“You mean up until I let you—” I choked on the words caught in my throat. God, why had I given him so much? I’d waited a year, and still, it wasn’t enough. Swallowing past the lump, I tried again. “Until I let you fuck me.”

His eyes quickly narrowed. “Let’s not forget,” he said slowly and with a touch of cruelty, “you begged me not to stop.”

“I thought maybe—” I stopped, wondering if it was wise to admit just how stupid I’d been. Vaughn’s eyebrow perked, daring me to continue. “I thought maybe you’d change your mind.” Summer’s end had been rapidly approaching, and I’d never been more desperate. I believed in the idea of soulmates, and from the moment Vaughn first kissed me, I knew he was mine. That kiss was the reason I stopped fighting his pursuit at the start of my senior year.

Vaughn obviously didn’t feel the same, judging by the way his body stiffened, and his nostrils flared at my confession. “You mean you thought you could manipulate my feelings with sex?” If possible, his tone became even colder than before. “While you were a phenomenal fuck, Bradley, no pussy is that good.”

I looked away, unable to meet his gaze, my tone despondent when I spoke. “I guess it doesn’t matter now.”

“Finally, something we can agree on,” he immediately spat. “No, it doesn’t matter now.”

I never realized before how much power Vaughn had over me. For a moment, we listened to the waves crash. For a moment, I wanted to walk into the night sea and let them drown me.

“Just tell me one thing,” I urged as a lone tear slipped down my cheek. I vowed that it would be the last I shed over him. Vaughn said nothing while he waited. “Of all the girls you could have screwed, why did it have to be her?”