I’ve had a crush on Dylan St. Clair ever since he climbed into my bedroom window ten years ago.

I was eleven, he was seventeen.

A bad boy from the wrong side of the tracks with a chip on his shoulder and fresh bruises from his latest fight, he went on to play the starring role in all my teenage fantasies.

But I always knew he was off-limits. So, over the years I gave up wishing and hoping we could ever be together.

Until he kissed me on a cold beach one starry winter’s night.

Until he said those five words that changed everything.

⭐️⭐️⭐️⭐️⭐️ 𝟓/𝟓 𝓞𝓿𝓮𝓻𝓪𝓵𝓵 𝓡𝓪𝓽𝓲𝓷𝓰: Sweet Chaos, book number two of the Love and Chaos series by Emery Rose. Although Sweet Chaos IS standalone to better the reading experience I would suggest reading Wilder Love prior. This is the second book I have read from Rose, the first being the companion book, Wilder Love. As much as I enjoyed Wilder Love, Shane and Remy’s story I knew I was in for a treat with Sweet Chaos and the brooding bad boy twin brother finally getting his happy ending. Rose has me ready to run off to California any day now! I was enthralled after reading Wilder Love, but after reading Sweet Chaos, I’m completely hooked! Emery Rose has a new fan for sure!

Dylan St. Clair and his twin sister Remy have lived a tough childhood. With an absentee mother, they struggled to survive while Dylan carried the weight of the world on his shoulders trying to be the man of the house and provide for his sister.

Now, at twenty-seven years old he’s managed to make something out of himself and is a very, very successful man. But after being put down his whole life he still struggles with not feeling good enough. He’s still the same broken and broody bad boy with walls high enough that no one could ever get over them.

Scarlett Woods has been in love with Dylan St. Clair since she was a child. But he was always the unattainable dream. Her sister’s boyfriend.

But when Scarlett moves back to town and the two’s paths collide Scarlett realizes things have changed and her feelings are no longer unrequited.

But to be together the pair have many obstacles to overcome, the biggest being Scarlett’s sister. Dylan’s ex-girlfriend.

But even though they know they should, both are finding it impossible to stay away from one another. It’s just too hard to resist the pull.

But once they collide, sweet chaos ensues…

💙 (𝓗) 𝓗𝓮𝓻𝓸: Dylan St. Clair is the perpetual broody, mysterious, bad boy. Dylan was forced to grow up fast and that has shaped the kind of man he is now. He’s still broody and moody and he doesn’t talk much but he’s loyal to a fault and he takes care of and fights for the people he loves. He just needs someone to fight for him for a change. When I first realized Dylan’s love interest was Scarlett and NOT Sienna, my jaw dropped. But now that I’ve read their story, I couldn’t be happier. Dylan and Sienna’s relationship was toxic. It wasn’t good for either of them. Plus, Sienna could never have loved Dylan enough to break down his walls, not like Scarlett does. I loved watching Starlet help him peel back his layers. Plus that dirty mouth of his… SHEESH! Dylan Freakin St Clair is exactly the type of character I love, even though he’s a millionaire now he still wears ripped jeans and combat boots. It can’t get any hotter than that.

❤️ (𝓱) 𝓗𝓮𝓻𝓸𝓲𝓷𝓮: Scarlett ‘Starlet’ Woods comes from a wealthy family but unlike her big sister, Scar has always marched to the beat of her own drum. As the “black sheep” of her family, Scarlett had always felt second best to her sister, unwanted, invisible. Now that she’s twenty-one she has been financially cut off by her father because she refuses to conform like her sister did, and making a living out of the art that she’s passionate about. I adore Scarlett! She’s an independent rebel and I admired her for it! I love that Scar was soo uniquely HER! She chose not to conform like her sister did just for an easier, cushier lifestyle. She was perfectly fine with working hard for what she had as long as she could do things HER way and not have to follow the line. She’s a sweet girl but sassy enough that she wasn’t going to take Dylan or anyone else’s crap. 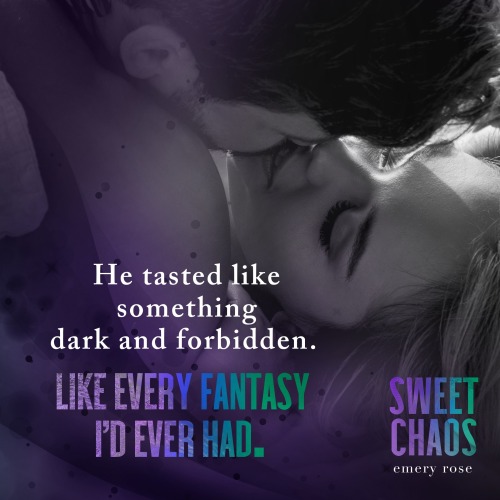 🔥🔥🔥🔥🔥 𝟓/𝟓 𝓢𝓽𝓮𝓪𝓶 𝓕𝓪𝓬𝓽𝓸𝓻: Emery Rose sure knows how to write steam! Although I don’t consider Sweet Chaos as “taboo” I can definitely see that it has a forbidden-ish feel to it because of the whole “my sister’s ex-boyfriend” aspect but that and the fact that they were sort of sneaking around just made things that much hotter between them. Dylan needed someone exactly like Scar that would love him hard, and love him enough to break through those stone walls he had erected and that’s exactly what she did. Although these two were supposed to be wrong for each other, they were so entirely right. The sexual tension between them was on fire from the very beginning, and once they finally collided sparks flew! Plus, did I mention Dylan’s dirty mouth? Sheesh, that man will have you losing your panties in a heartbeat!

❥𝟚❥ 𝓢𝓮𝓬𝓸𝓷𝓭𝓪𝓻𝔂 𝓒𝓱𝓪𝓻𝓪𝓬𝓽𝓮𝓻𝓼: I loved catching up with Shane and Remy and seeing their little family come together. They BOTH deserve it and my favorite parts of this book were seeing the bond and relationship between Dylan and Remy. I wish my own relationship with my brother was even half what theirs is.

🌪 𝓒𝓵𝓲𝓯𝓯𝓱𝓪𝓷𝓰𝓮𝓻 𝓦𝓪𝓻𝓷𝓲𝓷𝓰: Nope, no cliffhanger. It takes a bit of heartache but Dylan and his Starlet finally get their happily ever after.

P.S. – I freaking HATE Sienna. I saw some reviews asking whether she was getting a story or not, just an FYI, I’m totally fine if she isn’t. 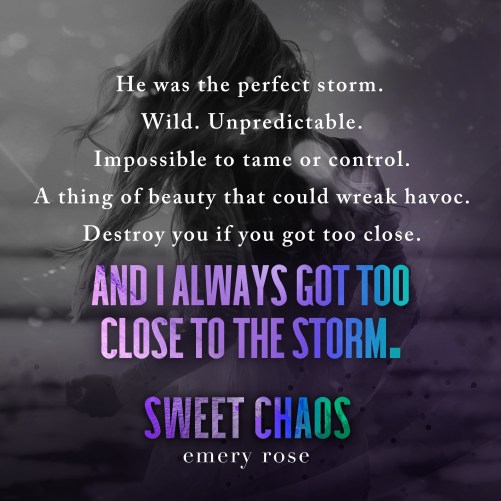 Sweet Chaos has everything you look for in a romance. It’s sweet, funny, just enough angst and drama, smoking hot steamy scenes, amazing unforgettable characters, and a well-developed plot that keeps you intrigued from the very first page. I highly recommend checking out Sweet Chaos, as well as Wilder Love. Again, if you haven’t read Wilder Love yet please go check that one out first. Even though Sweet Chaos CAN be read as a standalone, you will miss out on quite a bit of Dylan’s back story and just how tough things were for him and I think that’s important to really understand his character and why he is the way that he is.

Emery has been known to indulge in good red wine, strong coffee, and a healthy dose of sarcasm. When she’s not working on her latest project, you can find her binge-watching Netflix, trotting the globe in search of sunshine, or immersed in a good book.

A former New Yorker, she currently resides in London with her two beautiful daughters and one grumpy but lovable Border Terrier.