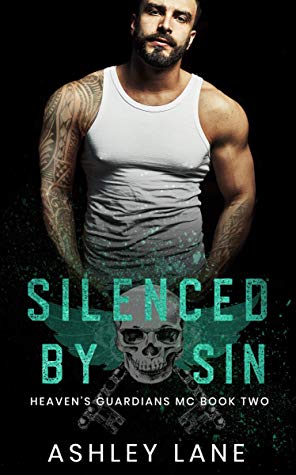 The smallest caskets weigh the most.
I lost myself the day I buried my daughter.
Her death was only the beginning of my downfall.

I will not play God.
As a doctor, the oath I took bound me.
As a father, only blood could set me free.

Pain is my prison.
With guilt my only companion,
I bought myself a life, Silenced by Sin.

You are not defined by your mistakes.
I refuse to regret the choices I’ve made.
I embrace them.

I will bow to no one.
Fear does not make me weak.
In the face of fear, I find my true strength.

I will rise.
With fire in my veins and embers in my soul,
I will give my daughter the life she deserves.

Silenced By Sin is book two in the Heaven’s Guardian MC Series by Ashley Lane! Told in dual POV, we first met Dr. Evander ‘Patch’ Cruz the biker with the tortured past, in book one, Washed In The Blood. From the beginning, we knew that Evander’s past was filled with heartache, and his present was spent shrouded in guilt. But just how much heartache… we could have never imagined. I am still amazed that this is only Lane‘s second release. After reading Washed In The Blood I quickly became a fan, but now after finishing Silenced By Sin, I am completely hooked! In Silenced By Sin Patch finally gets his second chance at life, and love when he meets single mom Alaska.

Single mother Alaska Watson is down on her luck and just barely getting by. Her life revolves around her daughter Grace and trying to make a better future for her but Alaska continues to run into one stroke of bad luck after another.

Just when it seems like things are turning around for her and Grace, she’s fired from her job at the car dealership and things go from bad to worse.

In desperate need of help and out of options, Alaska makes a choice. A choice that gets her involved with some very, very bad people…

When Alaska FINALLY lands a job at Wicked Wrench. The local auto shop run by none other than the Heaven’s Guardian’s MC. she prays that this will be the turning point for Grace and her. She’s out of options and certain debts need to be paid.

When Patch walked into the car dealer shop that unknowingly rented out the vehicle that helped aid the man who harmed his club’s president’s ol’ lady, he never imagined he’d ever see the woman responsible again.

That is until he walks into Wicked Wrench a year later to see none other than Alaska Watson working the front counter.

Patch has felt guilty about getting Alaska fired ever since he saw the baby set in her car the day he left out of the dealership. Now that he knows just how dire Alaska and her daughter Grace’s situation is, there’s no way he can walk away.

But the closer he gets to Alaska and her precious daughter, the more his past haunts him. Evander can’t let the past go, he still carries around so much guilt for the death of his own daughter that he won’t allow himself to find love.

But how can he protect Alaska and Grace if he can’t be around them?

Can he keep Alaska’s identity a secret from his club brothers?

Will Evander’s past put a stop to this relationship before it even has a chance to begin?

You’ll have to check out Silenced By Sin to find out!

❝ Whatever demons haunt that man, they are big. Am I ready to take something like that on? More so, can he take on mine?❞ 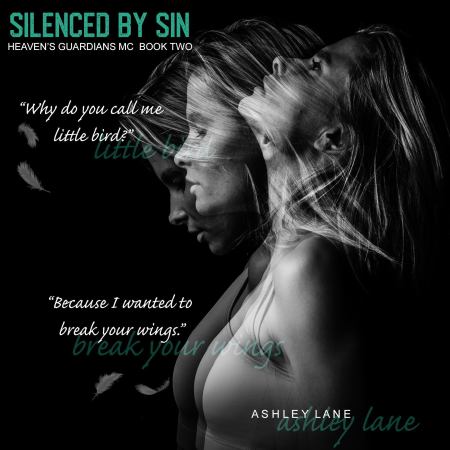 I go through my kicks every few months, one month it’ll be rockstar romances, the next it’ll be bully romances, and so on and so on. Silenced By Sin couldn’t have come at a better time because this month just happened to be MC romances and this beautiful, emotional MC romance about love, loss, and second chances is EXACTLY the kind of book I was looking for!

Ashley Lane has me hook line and sinker with this series. She has created an amazing world with these well-developed characters and their storylines filled with enough suspense to keep you enthralled from the first page to the last page.

Alaska is an amazing mother. She may have made a few mistakes, but show me a mom who hasn’t. She’s done EVERYTHING she can to try and protect her daughter in the best way she knows how. I adore how protective she is when it comes to her little girl. You don’t wanna mess with a Mama bears cub. I also appreciate that even when she was down and out, she still didn’t want to take handouts. But she also wouldn’t let her daughter go without just because of her pride either.

I must admit I was a little worried. After reading Washed In The Blood, I had an image of Patch in my mind… and it wasn’t a sexy one. So I wasn’t sure how I was going to get “in” to this story. Well, let me just tell you, I had it ENTIRELY wrong, and Evander Cruz is FINEEE! My heart broke over and over watching Patch continue to punish himself. The guilt from losing his own child and the circumstances around her death left him feeling unworthy of love and happiness. But try as he might, he couldn’t walk away from Alaska, or Grace. Patch feels an unexplainable but undeniable connection to Alaska right from the very start and that connection only continues to grow the closer he gets to her and her daughter.

These two together are the piece that the other is missing. Alaska helps Patch learn how to let go of his past and start living for the future. Patch gives Alaska and her daughter Grace a sense of home and family that she’s never had before. It may have been a slow burn for these two, but when Patch finally stops fighting against himself, sparks flew out of my Kindle!

I can’t not mention Alaska’s daughter. Little Grace is such an amazing little girl. She may be deaf but that doesn’t slow her down one bit. Some of my favorite scenes are of Evander and her together. I think him already knowing sign language and being able to communicate with her when she’s used to only being able to communicate that way with her mom, was extremely vital in helping Patch and Grace quickly establish a relationship.

❝ Sweetheart, if it means I get to spend time with you, I’ll buy you the moon.❞

I adore the secondary/supporting characters and I was glad we were able to catch up with Willow and Priest, and their family. As well as Angel, and Bullet. We didn’t see much of Demon this time around, but he was still around, in the shadows. I couldn’t help but laugh out loud when Priest would get the guys to talk or do stuff by threatening to call Willow out to handle them LMAO hilarious to see these big strong, badass bikers scared of a little ol’ pregnant lady. I love that there is always a scene where the whole FAMILY comes together, whether it be a barbecue in the backyard or them all rushing in to save the day, they continue to show exactly what makes these guys a real family.

I am so invested in these men and the ladies that capture their hearts, I can not wait for Bullet’s story, Haunted By Regret! I am loving Heaven’s Guardians! I highly recommend checking Silenced In Sin as well as the rest of the series!

⭐️⭐️⭐️⭐️𝟙/𝟚 – I loved it! Silenced By Sin is a beautifully written emotional MC romance about love, loss, and second chances. I can’t wait for more of Heaven’s Guardians!

🔥🔥🔥🔥 – This one is a bit of a slow burn, but when Patch finally stops fighting against himself, these two had sparks flying out of my Kindle! That dirty mouth of his was a surprise for sure but it was a very happy surprise! 😂😂

🌪 ℂ𝕝𝕚𝕗𝕗𝕙𝕒𝕟𝕘𝕖𝕣 𝕎𝕒𝕣𝕟𝕚𝕟𝕘 – Alaska and Patch get their happily ever after. But… Bullet’s story, Haunted By Regret is up next and the ending of Silenced By Sin had a lead up for his story!

$3.99 or FREE with Kindle Unlimited

Ashley Lane has been passionate about words her entire life.

Christmas in 2014. Since then, she’s become infatuated with words and the way they can break her but make her whole at the same time.

Ashley’s love for reading transformed and became a need to share stories that have been inside her head and heart for years. In 2018 after some much convincing on her husband’s part, she opened a Word document, and Priest and the Heaven’s Guardians MC was born.

Being the boy mom of an almost 2-year-old and 9-year-old means she lives off Goldfish crumbs and Diet Coke. But when she does have a spare minute of time to herself, you can typically find her parked on the couch, Kindle within reach, catching up on the previous week’s episode of Grey’s Anatomy or Hell’s Kitchen.