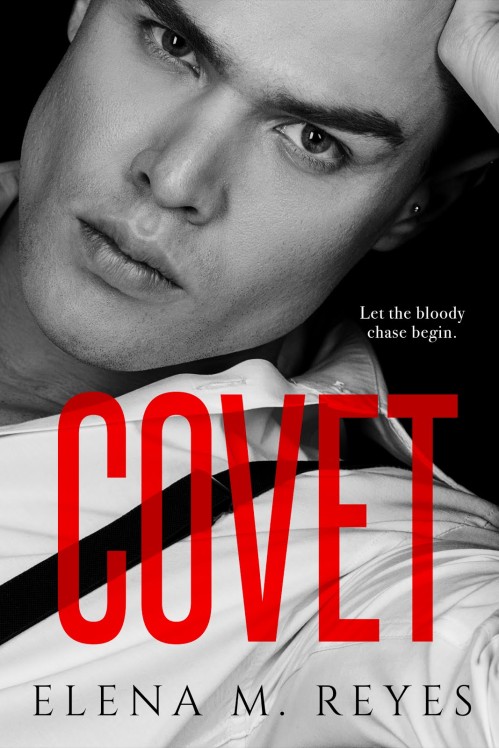 I’m a sinner. A criminal.
The beast that will never let her go…

Everyone in England knows the name, Casper Jameson. They know that I’m a cruel bastard with no regrets when it comes to dealing with those that cross me. They fear me; a man with no morals. Someone cold—without a weakness.

Until I see her…

She’s beautiful; a delicious temptation standing across the room from me without a care. Unaware of the danger that lurks—that this man wants to consume her.

I’m going to own her every sigh.
Taste her every moan.
Drown in her pleasure.

Covet is book two in the Beautiful Sinner Series by Elena M. Reyes! I have been looking forward to Covet since the day I finished Sin! If you thought Sin was hot, you haven’t seen nothing yet! Although this is a series, the books are interconnected standalones so you don’t have to read them in order BUT with that being said, I’m glad I read Sin first since there are characters from that story that we get to catch up with in Covet. Told in dual POV you aren’t going to want to miss this steamy, suspenseful, mafia romance! 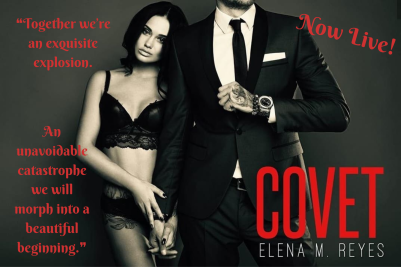 Casper Jameson, the head of the Jameson Syndicate based out of the UK. Casper is ruthless and everywhere he goes, in the UK or America, people know he isn’t one to be crossed.

Casper is out for a few drinks with his crew, trying to unwind after a shipment that went wrong when a bombshell catches his eye.

He’s immediately smitten and with a few glances and a bit of conversation, he takes her home with him.

After a wild night together, Aurora discovers that there is more to Casper then she expected.

He’s a criminal, a mobster, a bad guy… just like her father.

❝I’ll always be the same depraved arsehole, but with an exception now. Gem is the exception.❞ 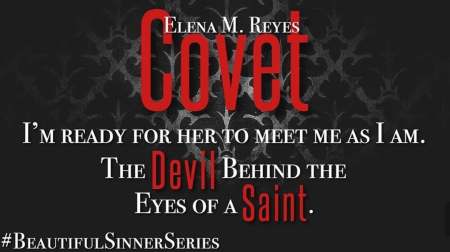 But she doesn’t get far.

❝For her, I’ve become a stalker. The lion in our private game of chase.❞

Aurora Conte is the heir to the Boston mob king, but she wants nothing to do with that lifestyle.

Even though there is a pull towards one another that neither of them understands, their story is all too familiar to Aurora. She refuses to go down down the same path that her mother did, with a man that chooses “the” family instead of “his” family and she can’t trust her heart with a man that’s just like her father.

❝He’s nothing but bad news wrapped up in a handsome package. A beautiful disaster. This man has heartbreak written all over him, and I’m going to be damaged goods after he leaves.❞

But the pull between them is just too strong to deny, and Casper doesn’t give up easily.

Just as Aurora starts to give in to the idea of “them” something unexpected happens within Casper’s family and he’s called away.

Leaving their relationship in a state of confusing lingo for months on end.

Aurora already has such a preconceived notion of “men like him” and the distance makes her insecurities run wild.

Even with an ocean separating them Casper is never far from his Gem. Showing up ecspecially when she needs him the most and always making sure she’s protected… even if she doesn’t know it.

❝Together we’re an exquisite explosion. An unavoidable catastrophe we will morph into a beautiful beginning.❞

But while Casper looks into what’s happened, making those who hurt someone close to him pay all over the world. A rival crime family steps in trying to steal territory… and Aurora.

Can Casper continue running his empire while also protecting Aurora?

You’ll have to check out Covet to find out!

❝Aurora looks like the sweetest mess for me. Like a bad decision under the design of a priceless jewel. Like a gem. The kind I’ll covet.❞

Covet kept me right on the edge of my seat until the very end! As the story progressed I was doing my best to try and guess who was up to no good, and who was behind what happened. Let me just tell you, there was ONE thing that I guessed right. The rest I had NO FREAKIN CLUE! I LOVE being surprised by endings. It doesn’t happen often. I’ve read so many books that I can usually guess pretty quickly, but with this one, I was left with my jaw on the floor!

Casper, the sexy and vicious mob boss is all kinds of dangerous and protective and if you hurt the people he cares about… well let’s just say he’s got a pair of karambit’s with your 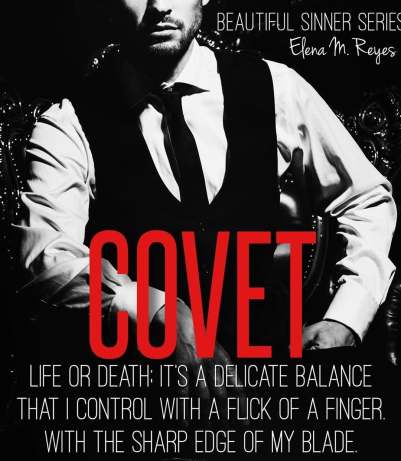 name on them! The times that he was affectionate towards his Gem *SWOON* I think I highlighted damn near everything he said to her. For such a hardcore ruthless killer, he’s a total sweetheart! He made sure Aurora knew from the very beginning that he wanted her and no one else. Aurora belonged to him. He may have messed up a few times as far as communicating with her, but she was never far from his mind and she was ALWAYS protected.

Aurora is my favorite type of heroine! She’s sassy and has no problem standing up for herself. She stands up for herself and doesn’t back down from anyone, not even Casper. I felt for her while she grieved for her mother and I loved how understanding she was when Casper had to do what he had to do and although I wanted to be mad at her once she stopped understanding but I couldn’t. He broke his promise. He didn’t call and I know I would have felt the same, especially with the insecurities she already dealt with.

❝You’re my Gem because you’re trouble under the disguise of a priceless jewel. Rare and hidden, but once found, they come attached to a heavy price tag. A life of servitude.❞ 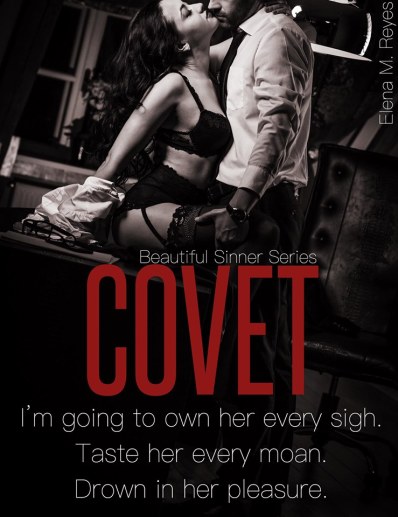 Casper and Aurora are freaking smoking HOT!!! Seriously you guys, the steam in Covet is on point!!! These two are hot and heavy right from the very start! As the story unfolds their relationship just becomes more and more intense and the passion between them continues to flame. The push and pull between them just make the times they are together even hotter. Ya’ll better have a change of panties when you start reading this one!

❝From the moment I laid my eyes on her face, I’ve become an addict. Wanting more. Needing her closer. it’s something that makes absolutely no sense, but I’m not fighting either. It just is. We just are.❞

The only thing I would have liked to have seen more of was Casper and Aurora spending a bit more time on the same side of the ocean. But because of the plot of the story and what was going on, I totally understand why the story was the way it is, and it all worked out perfectly in the end.

I have been obsessed with Reyes‘s work ever since I first got my hands on Sin! Elena is the freaking BOMB at writing these sexy alpha mobsters along with their leading ladies who although have an innocence to them, still have that backbone that I love in heroines. Her flow, her style, she is most definitely one of my one-click authors and she hasn’t disappointed me yet!

If you enjoy suspenseful romances with a darker edge and a whole lot of sexy, then you are going to want to check out Covet, as well as Sin!!! I am loving this series and I can’t wait to get my hands on Thiago and Luna next in Mine. You don’t want to miss these beautiful sinners! 😉😘 I highly recommend!

❝If you do, Gem, I’ll follow. Remember that. I’ll always be but a few steps behind.❞

⭐️⭐️⭐️⭐️⭐️ – If you enjoy suspenseful romances with a darker edge, a sexy alpha mafia man, and a whole LOT of sexy, then you are going to want to check out Covet! Trust me when I tell you, you don’t want to miss these beautiful sinners! HIGHLY RECOMMEND!

🔥🔥🔥🔥🔥 – From the very FIRST PAGE, Covet is SMOKIN HOT! Like seriously, up against the door, all the way through the house, and to the bedroom hot! If you thought Sin was hot… you haven’t seen nothing yet!

🌪 ℂ𝕝𝕚𝕗𝕗𝕙𝕒𝕟𝕘𝕖𝕣 𝕎𝕒𝕣𝕟𝕚𝕟𝕘 – No cliffhanger, after a whole lot of suspense and angst there is a happy ending for Casper and Aurora! But now I’m even more intrigued with Thiago and Luna and can’t wait to get my hands on their story, Mine! 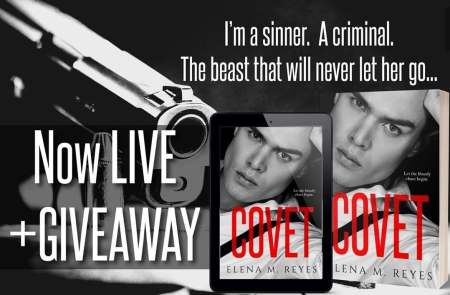 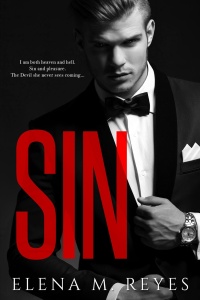 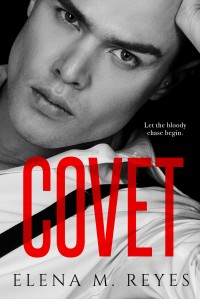 Elena M. Reyes was born and raised in Miami Florida. She is the epitome of a Floridian and if she could live in her beloved flip-flops, she would. 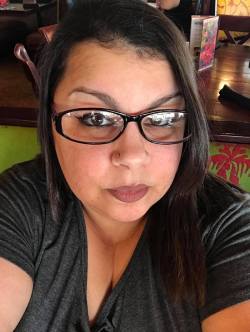 As a small child, she was always intrigued by all forms of art—whether it was dancing to island rhythms, or painting with any medium she could get her hands on.

Her first taste of writing came to her during her fifth-grade year when her class was prompted to participate in the D. A. R. E. Program and write an essay on what they’d learned.

Her passion for reading over the years has amassed her with hours of pleasure. It wasn’t until she stumbled upon fanfiction that her thirst to write overtook her world.

She now resides in Central Florida with her husband and son, spending all her downtime letting her creativity flow and characters grow.