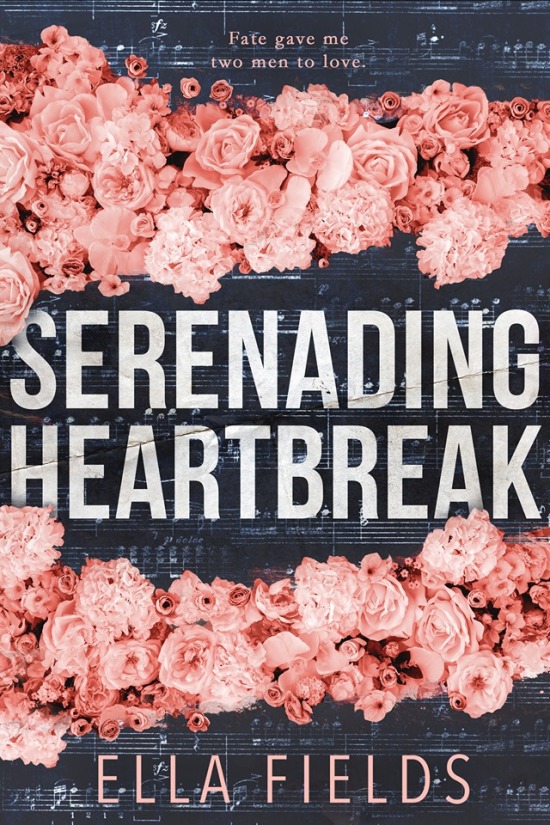 My first love was my brother’s best friend.
A lead singer in their band.
A picture of rugged perfection.
And a drunk soul mate who couldn’t commit.

My second love was an arrogant baseball player.
A player in every sense of the word.
A smooth-talking, reliable best friend.
And a chance at something beautiful and true.

The problem with having a first and second love?
That would be loving them at the same time.
My story isn’t some sexy triangle.
It’s exquisite agony.
Fate gave me two men to love,
but none of us knew which one I could keep.

“To fall in love twice was a beautiful rarity. To be in love with two men at the same time was a cruel twist of fate. Your soul was split right down the middle, a piece of you stolen forever.”

Serenading Heartbreak by Ella Fields is an emotional, breathtaking, heartwrenching story! The angst is real with this one ya’ll! I finished Serenading Heartbreak days ago and my emotions are STILL all over the place. The angst, the love, the heartbreak, I just… I can’t even describe it. If you are looking for an angsty af love triangle, Serenading Heartbreak is the one for you. I’m struggling with writing this review, you guys. I really don’t want to give away ANYTHING! This is one of those brilliant books that are just that much better if you go in completely blind and form your own opinions of each and every amazing character.

What happens when you find your first true love, and then are lucky enough to find a second true love… and then having to make the ultimate decision.

Choosing between the two.

Stevie Sandrine was smitten with the dark and dirty, brooding bad boy across the street the moment she saw him.

Everett Taylor quickly became her brothers best friend and bandmate and as the years went by Everett started to see Stevie the way she saw him. Much more than just his best friends little sister.

“Hearts are such unpredictable things, you can never control to whom they might sing.”

But as they were growing from kids to teens, to adults, their band was as well.

Just when Stevie and Everett finally give in to their attraction, the band takes off on a tour across America.

Leaving a heartbroken Stevie behind.

The love she had for Everett never wavered but after having no contact with him Stevie tried to repair her broken heart. Convinced that she’d never love again.

“He’d been my dream since I’d first laid eyes on him, and I gave up on him when he’d turned into a nightmare.”

But Stevie learned the hard way that love has no bounds, there are no rules to love, no rhyme or reason. It just happens, most of the time when you least expect it.

After some convincing on Aiden’s part, Stevie takes another chance on love. From friends to lovers, to so much more.

“A love that rivaled another.”

But when Everett suddenly comes waltzing back into her life everything she has built with Aiden is turned upside down.

Stevie is being pulled in two separate directions with two very different futures awaiting on her depending on who she chooses. 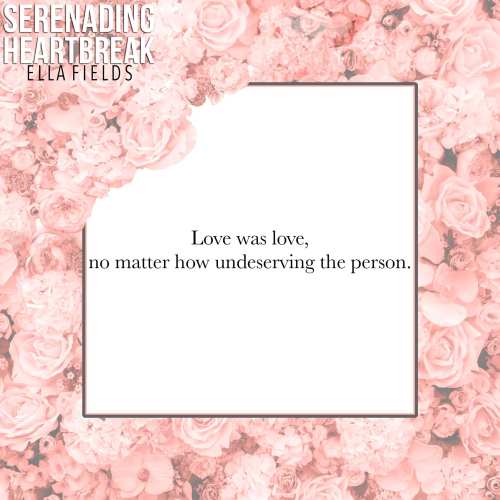 Her heart belongs to two men, but it beats for only one.

What do you do when you are in love with two people?

WHO do you choose?

HOW do you make a seemingly impossible choice?

“You deserve to be someone’s entire world. Their first and only choice.”

“…when the heart was desperate, it was capable of ignoring whatever it needed to.”

Two incredible men entered Stevie’s life at completely different times, but each when she needed them the most. She loves so fiercely and so deeply that she has enough love for not one, but two men. Without a shred of doubt, both of these guys are completely in love with her. Both of them are completely different. Both have made mistakes, neither is perfect. But decisions have to be made and hearts are going to be broken. How can you give your whole heart away when all the little pieces already belong to someone else?

You guys, my heart will never be the same. I’ve been on a rollercoaster ya’ll! Seriously, I have laughed, I have cried (yes, I freaking cried!), I’ve yelled, I’ve cussed, I’ve thrown shit… Ella Fields is an absolute genius when it comes to writing angsty romance, and Serenading Heartbreak is the definition of ANGST! This story… what a phenomenal read. Serenading Heartbreak isn’t the kind of book that you’ll forget as soon as you are finished with the last page. This one is going to stick with you for a long time to come. Every time it’s mentioned you’ll remember all the feelings that this one invoked.

“Like the sun and the moon, we’d always revolve around one another, doomed to dance on opposing sides of fate.” 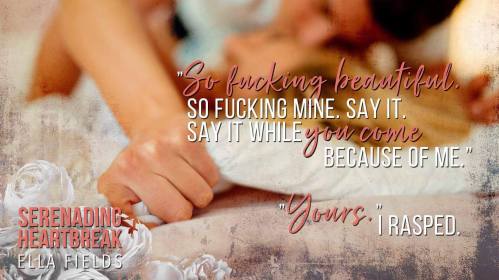 I fell for both of these guys just as quick as Stevie did. They both have that SOMETHING that makes it damn near impossible not to. I am completely torn, you guys. I have no idea how Stevie was able to make a choice because there is absolutely no way I could have. I loved both of these guys so, so much. They both have their flaws, but when they love… sheesh, when they love they love so hard. If this type of book doesn’t invoke some kind of emotions from you then you aren’t reading it right!

Up until the last few chapters, I was STILL undecided on who I wanted Stevie to choose. Who am I kidding, I’m still undecided about how I feel about her choice. But ultimately, I do think it was the right one. A love like that… how could she have possibly made any other choice? Ultimately, the heart wants what the heart wants. I, on the other hand, I still can’t choose. Don’t ask me too. I won’t even try.

I was so invested in these characters. I felt like I was right alongside Stevie. I didn’t want her to choose. I didn’t want to see either of these incredible guys hurt. I wanted everyone to get a happy ending. But in the end, there was a choice to make. Thankfully it seems that eventually, BOTH did get their happily ever after.

These characters. Unbelievably realistic. They all have their own unique personalities and flaws. The secondary characters, the band, Stevie’s best friend, Hendrix, they all added that little something extra to the story. I would LOVE if Hendrix got his own story… maybe with Adela?

“Love was a messy, drunk-ass son of a bitch.”

To Miss Ella Fields, I don’t normally write DIRECTLY to the author in my reviews, but with this one, I HAVE to. You are the QUEEN of fucking with my emotions and completely ruining me. I am literally RAW right now after finishing this book. You have pushed my boundaries and you have broken my heart, a few times now! And then slowly but surely, piece by piece, page by page, put it back together again. BRAV-FUCKING-O!

“When things get hard, you don’t run away, and you don’t give up. You plant two feet into the ground, remember the roots you’ve grown, the life and love you’ve nurtured, and you fight.”

⭐️⭐️⭐️⭐️⭐️ ABSOLUTELY PHENOMENAL STORY! I mean honestly, you can’t get much better than this. I would give it many, many more than 5 stars if I could!

🔥🔥🔥🔥 STEAMY AF! Not only do we have one male lead that’s sexy and all alpha as hell, but we have TWO!

🌪 Cliffhanger Warning: NO cliffhanger. There is a happily ever after, for everyone. But it happens AFTER a whole lot of heartbreak. 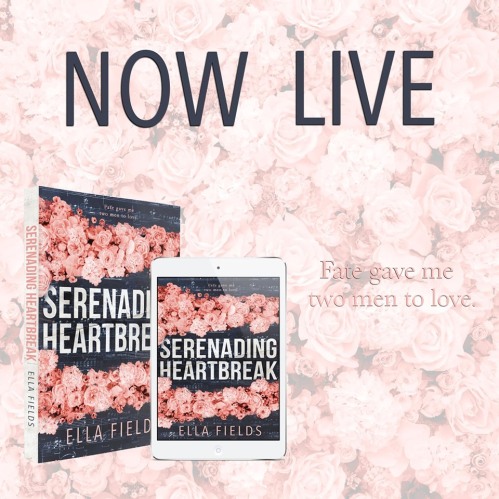 We bumped into the counter and he cursed, muttering an apology as he set me on it.
Removing my jacket, I could hardly breathe when his teeth sank into my lip. His hands pulled at my tank, tugging it and my bra down over my breasts.

“Fuck.” He tore his mouth away, lowering to my chest as he unzipped his jeans.

I gripped his face, needing those lips back on mine, then I reached for his waistband, shoving his jeans and briefs down.

He helped, and then pulled me right to the edge, testing my entrance with his thumb
before licking the digit and pushing my panties aside. “I still have your other pair,” he said, his breath rattling as he pushed at my opening.

“Wha–oh, shit.” He rammed inside, and my head rolled.

He slammed in and out, again and again, one hand around my leg that’d been looped
behind him, and the other behind my head as he bent over and hammered into me, sucking at my throat.

It’d been so long, and I felt just how long as the discomfort slowly fled and pleasure began to flood my bloodstream. “I-I think I’m coming…”

Everett chuckled, the sound dark. “You think? Clover, when I’m fucking you, you know
damn well you’re coming.” Then he lifted me and spun us around until my back met the
cool exterior of the fridge, magnets digging into my ass while I kept my legs wrapped tight around him.

I mumbled incoherent pleas to his tongue as it slid over mine. Our teeth clacked, his
hips jerking up so fast and hard, I was on the edge and shaking for what felt like
minutes. “So fucking beautiful. So fucking mine. Say it.” He reached between us to flick
me into a million shattering pieces. “Say it while you come because of me.”

“Yours,” I rasped, and he held my face as he jerked and stilled, his forehead hard on mine and his breath choppy as it drifted inside my mouth.

We remained like that, eyes locked, our thundering hearts taking their time to slow and
calm. His finger drifted over my cheek, and his cock softened inside me. 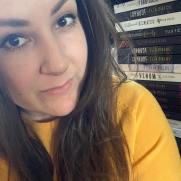 Ella Fields is a mother and wife who lives in the land Down Under. While her kids are in school, you might find her talking about her characters to her cat, Bert, and dog, Grub.
She’s a notorious chocolate and notebook hoarder who enjoys creating hard-won happily ever afters.