North, South and a Star.

Death is postponed by a debt of gratitude. Envy encourages the unthinkable.

Two enemies wish for the same thing – to take what the other one holds dear.

And in the midst of all the chaos – Layla, the perfect bargaining chip for both sides to manipulate.

Divided between two bosses, blinded by her own unfulfilled needs, she ignores the risks and makes irrevocable decisions that put her in danger.

When the enemy becomes an ally, and an ally becomes an enemy, Layla’s loyalty starts to lose the battle with reason.

Her conflicting feelings for her father and the newly found fondness towards his biggest rival complicate things more.

Layla finds love where it shouldn’t be.

Safety where only danger lies, and happiness in the darkest of places, but in the world of Mafia rules don’t apply. Inhibitions don’t exist.

Betrayal hangs in the air, and Layla has to decipher the havoc of her past and present to find a way to stay alive.

Add Broken Rules to your TBR

Broken Rules is author I.A Dice’s FIRST release and to say I’m surprised is an understatement! For a new author the plot, the pace, as well as character depth was outstanding!

So anyone that follows me knows that right after dark reads, mafia reads are on my favorites list! So when I saw I.A posting about ARC’s for Broken Rules and after seeing only ONE teaser photo and the blurb, I was all over it, SOO glad that I took a chance on this one!

Broken Rules is about Layla Harston and Dante Carrow.

Sworn enemies, these two should never have been in the same town as each other much

But that’s where they wind up. Dante is instantly intrigued, who is this girl that talks back to him and is trying to make him leave her alone in HIS own bar?!

When he finds out she’s the daughter of his biggest enemy it should turn him off, he should let her finish her drink and send her on her way. Better yet, he should hold her hostage and make Frank give him the Northside for her safe return. But Dante doesn’t want to do any of that, all he wants to do is kiss the next smart ass comment out of her mouth.

That one night is all it takes and Dante is hooked. It takes a little more convincing on his part to get Layla on the same page as him but the attraction between them is just too undeniable to resist.

“Five minutes of conversation with Layla and I wanted to talk to her for hours. One kiss and I wanted to kiss her every day. One missed call made her the only thing on my mind. I wanted her for myself. I wanted to get to know her, make her smile, and find out whether our relationship had a best before date. Who cared we meet three days ago? If I didn’t get bored yet, then it meant she was extraordinary.”

These two are the ultimate forbidden couple. Dante is the head of the Southside of Chicago mafia, Layla’s father the head of the Northside. Layla’s whole life has been controlled by her father but yet neither of her parents have ever really shown her love. 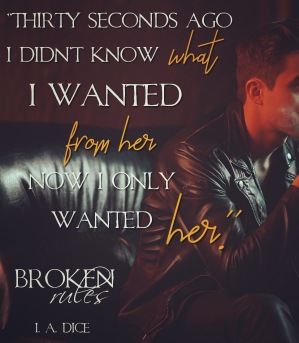 She craves their attention and their love and when she receives just that from Dante, she can’t help but fall in love with him.

But when this war between two sides comes to a head and Layla is standing on the line between the two men that she loves, whom will she choose?

You’ll have to check Broken Rules out for yourself to find out!

“I’m a very territorial man, star. And you are the most prized of my possessions. Jealous doesn’t begin to cover it.”

Dante’s protectiveness towards Layla is the hottest yet sweetest thing ever! And oh my gosh, the banter back and forth between these two is absolutely adorable!

Dante has definitely moved over to the list of top book boyfriends! He’s overly protective but that’s because of the dangerous world they live in. There is nothing better than a man who is so in control, losing that control over the woman he loves.

I love Layla! She is so feisty and tough, she’s not afraid of Dante in the least. Even in the beginning when they first meet at the bar, she was putting him in his place from the very start and even trying to shoo him away from her! She is exactly what Dante needs and the same for her. Dante gives her the love and attention that she has craved and hasn’t received from her parents her whole life.

I was NOT expecting that ending! In fact, I thought that this was just going to be one book, which usually I would wait to read until the rest of the series was close to being

released but once I started I was too invested to stop, but DAMN I was NOT prepared for that plot twist! I mean I knew the war was going to come to a head but I was not expecting THAT! Ahh, it’s so hard to not give away spoilers and trust me, you want to go into this one blind!

This is why I LOVE finding NEW authors! Take my word for it and take a chance on I.A. Dice, she’s going to be one you have to watch out for in the coming future, she keeps putting out quality writing like this, you’ll be seeing her name a lot!

This book has it all! Hot mafia guys, a sexy overprotective anti-hero, a smart sassy heroine, romance, lies, betrayal, Broken Rules has it ALL! 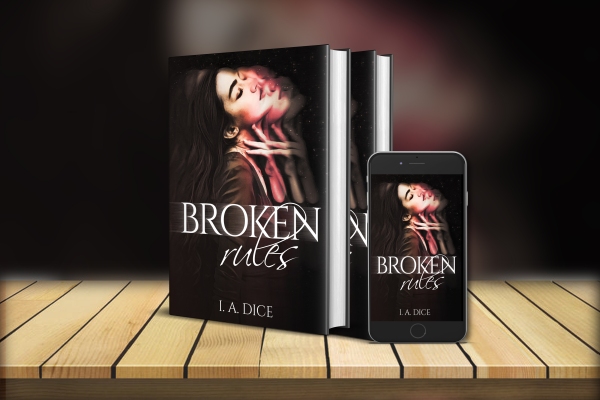 I opened the wardrobe and moved my clothes to make room.
“Don’t take out your wallet when you’re with me, Layla. Forget you own a wallet. Money’s my area.”
She scoffed like a kitty, hanging her dresses.
“And what’s my area? Looking pretty and agreeing with everything you say?”
“I’m still waiting for you to agree with me on something, anything, really. All you do is argue.”
She rolled her eyes and placed the jumpers on a shelf.
“I like teasing you.”
I’d swear I saw her folding those, but it looked as if she just threw them in there.
My OCD got the better of me.
Everything in the wardrobe was carefully planned, the shirts hung color-coded next to suit jackets, also color-coded.
Jumpers, t-shirts, and pants were neatly folded.
“Give me that.” I took the clothes out of her hands and started again.
“Am I disrupting your Feng Shui?” she chuckled.
“Sit or go take a bath.”
Pulling on my belt, she raised on her toes to reach my lips.
“I can’t pay, don’t know how to fold clothes…” she whispered, biting my lip.
“Is there anything I do well?”
“You’re a good kisser, you smell nice, and you’re incredible at getting on my nerves.”
I slapped her butt, pushing her gently in the direction of the en-suite.
She dived under my arm, grabbing one of the white shirts.
I caught her wrist before she moved away.
“You bought two nightdresses, and you want to sleep in my five-hundred dollar shirt?”
“I didn’t buy those, you did. And…” she pointed to the see-through pieces of fabric on the bed.
“I’ll be cold in this.”
“I’ll keep you warm. Give me the shirt back. It’s my favorite.”
A mischievous grin appeared on her face.
She pecked my lips and holding my gaze, she ripped off the top button.
“Oops, I don’t think you’ll wear it again. It’s not any good,” she faked a sad face and then smiled wider.
“I’ll sleep in it. Okay, baby?”
Little devil.
I threw her on the bed, hiding my face in her cleavage, feeling desire tingle every inch of my body.
“Incredible,” I whispered, ripping her blouse down the middle, exposing her goose-bumps covered stomach, “at getting on my nerves.”

I. A. Dice graduated from Manchester Metropolitan University with a Combined Honours Degree in International Business and Marketing (a bad, bad choice).

She’s been a waitress, a teacher, a gardener, an admin junior and a production planner. She attended college courses and never finished some of them.

And then she finally decided to trust her gut and pursue her biggest dream of becoming a writer.

Want a sneak peek at the first chapter of Broken Rules? 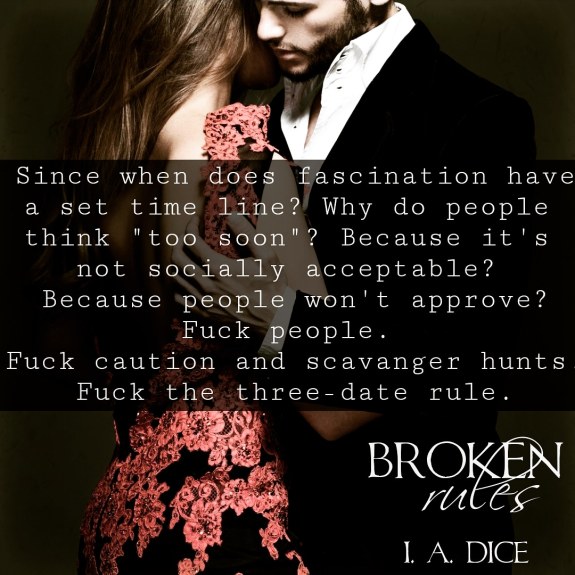 1 thought on “New author I.A. Dice just released Broken Rules and I am SOO glad I took a chance on this one! Check out my review & get your copy here!”